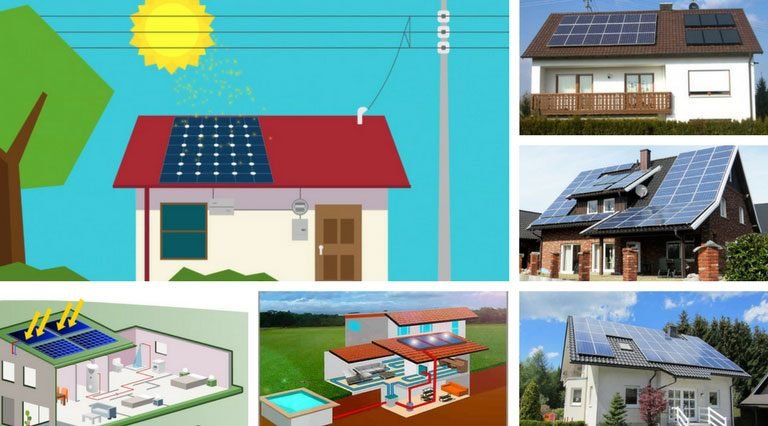 In a booming world of technological development and activism for the protection of the environment, it is logical to combine these two for the use of energy.

The  active solar,  refers to technology (equipment) used to convert  solar energy  into mechanical work or usable heat. We call this event ” active energy “. The systems that benefit from solar energy without using these equipments are called ” passive solar technology “.

That is why it is increasingly common to see sustainable architecture, thanks to the use of renewable resources. Of which, ironically, the most prominent manages to be one that is 149,600,000 km away from the earth: the sun.

What is Active Solar Energy?

The  active solar energy  is that which converts solar energy into “useful” work ie heat for example, the movement of the engines of washing machines and heating resistors in electric heating systems. This energy is measured in KWh.

When talking about the distribution of this energy, it is a bit complicated, since it develops the losses in the  electrical networks . Due to this reason, surcharges were created for the excess consumption for this type of energy.

Active solar energy also generates a drop in power in your installation, which leads to a greater contracted power.

The  solar  active  is capturing the sun’s energy and transforming it into electrical or mechanical energy.

The basis of  active solar energy  is the use of technologies to transform energy. For the use of this type of energy requires an economic investment to acquire solar equipment that best suits personal needs.

The  active solar energy  is divided into:

• Thermal energy.- transforms solar energy into heat, it is used as a hot water supply for domestic use.

A typical solar thermal system consists of collectors facing south, these collectors are black to absorb most of the sun’s heat. This type of energy is also used for heating and swimming pools.

• Photovoltaic  Systems.- Solar panels  convert sunlight into electrical energy, they can be mounted on the ground, but generally seeking higher productivity are located on the roofs of houses.

The use of active solar energy helps save on the costs of services such as electricity or gas payments. The equipment for the use of solar energy is very resistant and is designed to require the least
possible maintenance . 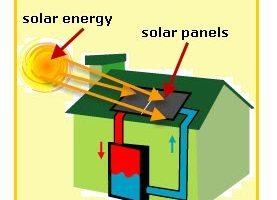 Active solar energy classifies the technologies related to the use of solar energy using mechanical or electrical equipment to improve the performance or to process the energy obtained either by converting it into  electrical  or mechanical energy . These equipments can be fans, water pumps, etc.

On the contrary, solar systems that do not use these devices are classified as  passive solar energy systems .

The applications of active solar energy can be classified into two types:

The  Solar thermal  exploits the properties of  thermodynamics  to Increase the  temperature  of a fluid to Increase ITS  energy  heat ífica and, THEREFORE, ITS  Entropy . In this form of utilization of solar energy, no electricity is generated  .

Systems of  hot water  that are not based on the thermosyphon system  use water pumps and fans to circulate the water within their circuits. For this reason, these systems would be classified as active solar energy.

In contrast, solar water systems that use  thermosyphon , the circulation of water is made by the difference of densities between hot water and cold water do not need external mechanisms and, therefore, are classified as  passive solar energy systems .

Most  solar collectors  are placed on fixed supports with a calculated orientation so that they can capture the greatest amount of  solar radiation  during the day and during the year. But these collectors would be more efficient if they could modify their orientation with respect to the Sun depending on the day of the year and the time of day.

There are systems to modify the orientation of  solar collectors . In case these systems are mechanical it would be active solar energy systems.

As in  solar thermal energy , solar panels can be oriented by a small  electric motor  to orient them more towards the Sun. This engine would be another external element.

Where do we get active solar technology?

Obtaining energy from this natural element through technology, is divided into two categories that depend on the capture, conversion and distribution of it. But the one that stands out for taking advantage of the benefits of the sun is active solar technology.

This term  refers to mechanisms that are used to capture the sun’s radiation and with this it produces electrical or mechanical energy . The result of the use of these technologies can be from refrigeration, ventilation or just storage for use in some future. 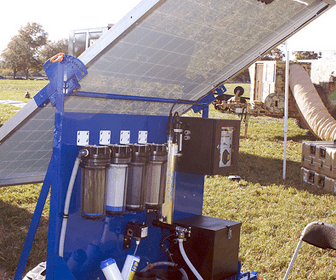 What is active solar technology?

The equipment that is managed to have these results is by heliostats mirrors, cylinders or parabolic discs, or also by tower power plants. To achieve high temperatures (2000 ° C), they are obtained from the sun’s rays hitting the mirrors and are directed to a reflector that takes them to a precise point.

At the same time,  active solar energy  is divided based on its capacity for energy transformation, resulting in two types:  thermal  and photovoltaic energy.

Thermal energy.- It  simply produces hot water, or in other terms, at no time electricity. This system is of domestic use, in heating, up to swimming pools. The system consists of cylindrical solar collectors painted black and insulated by a glass.

Photovoltaic Systems.-  This system generates electricity. Through solar panels that when exposed to the sun, silicon cells or other semiconductors generate an electric current. Usually it is located in the upper part of some installation to have a better use of solar rays, but sometimes they can be located in the ground.

Due to this the photovoltaic system is presented as the most advantageous and favorite in its class. The null maintenance, its ease of installation and its cost are some of the reasons why it manages to be a good alternative energy source, from these new technologies.

Active solar energy refers to those systems that are used to transform solar energy into usable heat, to generate air currents for ventilation or cooling or to accumulate heat for future use, all this process is done by mechanical or electrical equipment such like pumps or fans.

The systems that are responsible for the capture, use solar energy without using these devices, they are classified within  the passive solar technology .

Active solar energy, from the technical and energy saving point has the following benefits:

Currently, we are experiencing a boom in technological development and activism against the protection of the environment, so that active solar energy is a sustainable architecture, because it uses renewable resources and benefits from the resource that it is 149,600,000 km away from the earth: the sun.