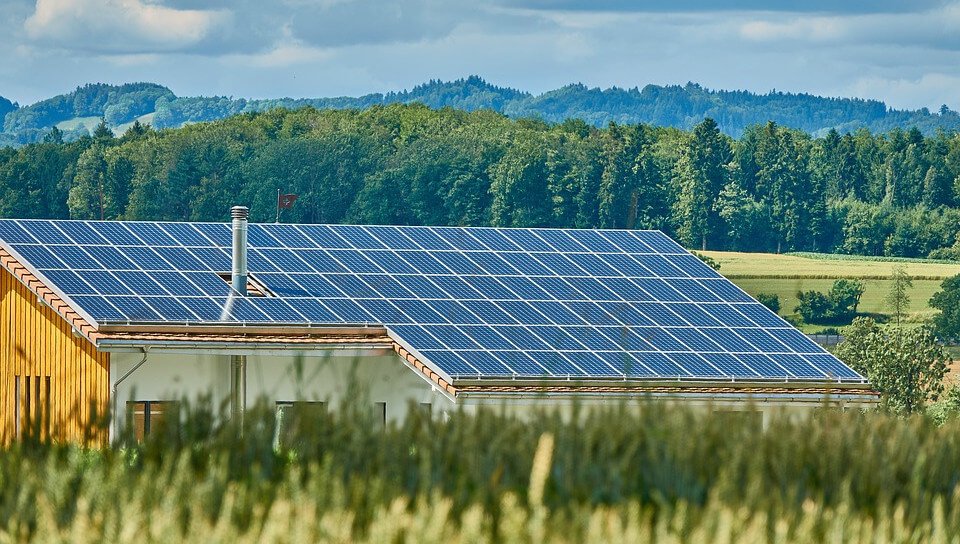 Este articulo lo dedico a hablar sobre Advantages and disadvantages of solar roofs.  Is it better to install photovoltaic solar panels or replace roof tiles with solar roof tiles? It is a common doubt among those who want to improve their home with this renewable energy source.

Advantages and disadvantages of solar roofs

In this article we analyze solar roofs,  compare them with  photovoltaic panels  and point out their main advantages and disadvantages .

What is a solar roof?

Colloquially, we call anyone who includes a photovoltaic element a solar roof or roof . Regardless of whether it is solar panels or real roofs built with photovoltaic tiles or tiles. To avoid confusion, in this article solar roofs will be just the seconds.

In any case, solar panels and tiles make it possible to transform a house (or industrial warehouse, warehouse, factory…) into a small power plant . This mini-station can cover the energy needs of the building. And on some occasions, even generate an electrical surplus.

In addition, both solutions serve to bring electricity to isolated homes, without connection to the electricity grid. But which of the two options is better?

Solar roofs are more expensive than panels, but they have important advantages. Let’s see them.

Roof tiles and solar panels integrate well into the architecture of the building . On the contrary, the panels are installed on cumbersome and unattractive metallic structures. Without a doubt, this is one of the greatest advantages of solar roofs.

For example, these systems could make it possible to install a sustainable roof in historic buildings protected by the regulations for the conservation of historical-artistic heritage.

Solar roof manufacturers, such as Tesla, offer various types of textures and finish colors on their tiles. Decorative roofs are thus achieved, whose aesthetics we can hardly distinguish from that of the traditional roof.

As an architectural element, the solar roof fulfills a double function. In addition to protecting the building from rain, wind, snow and sun, it generates electricity. In this way, it helps to reduce the cost of electrical energy.

The intelligent design of architectural elements is one of the sustainability criteria of bioarchitecture, sustainable architecture .

In general, the materials with which solar tiles are made are more resistant than ceramic or concrete. For example, Tesla’s Solar Roof is made of tempered glass. It has a lifetime guarantee.

Tesla jokes that its solar roof tiles “are guaranteed for the lifetime of the home or infinity, whichever comes first . “

Indeed, tempered glass is a material that withstands shocks better than ceramic or concrete tiles, or slate plates. And this is another important advantage of solar roofs: they are arguably better roofs overall .

The resistance of tempered glass is three times higher than that of a ceramic tile. The tests carried out by Tesla with projectiles of 5 cm in diameter projected at 160 km/h have obtained the maximum classification in resistance against hail (class 4). In other words, this means the (almost) zero probability of leaks due to broken tiles.

In short, solar roof tiles and tiles are manufactured with materials that are highly resistant to weathering (impermeability, wind, UV radiation) and are interesting in themselves as roof tiles, apart from their ability to produce electrical energy.

On the contrary, in a roof with solar panels, the sealing of the roof continues to be the task of the tile . In addition, maintenance of the roof is complicated. Replacing broken pieces or cleaning tile channels clogged with leaves or pine needles is more difficult because of the metal structure.

Some manufacturers of solar tile systems, such as Suntegra , offer elements that can be integrated into existing roofs. For example, this company’s photovoltaic shingles can be bonded with flat concrete roof tiles. This avoids the complete replacement of the roof, by being able to install one or more solar zones in certain areas of the roof.

There are several manufacturers that offer this type of product. In fact, even in Spain there are already alternatives of this type.

Manufacturers such as Vidrios Mascarell put eco-efficient Arab tiles on the table, which include photovoltaic cells to generate electricity. These tiles can be installed using the blanket tile and channel tile technique or on undulating roofs (uralite).

When the photovoltaic cell of a solar tile breaks down, replacing it is relatively simple. This quality is shared by almost all solar roof construction systems.

Of course, the solar tile is not the balm of Fierabrás. Despite their advantages, photovoltaic roofs also have their disadvantages.

Solar roofs are not adjustable

The place of installation of photovoltaic solar panels is very important. Two of the most studied points are tilt and orientation. To achieve the best energy efficiency, they are preferably oriented to the south. This is how they receive the maximum solar radiation.

In addition, there are even motorized systems that rotate slightly, such as sunflowers. The plates then look the sun in the eye. However, with solar roofs these possibilities are lost. You have to settle for the orientation of the roof plane.

Not being able to orient the tiles to the sun is one of the reasons for mixed solutions that make it possible to combine conventional and photovoltaic tiles . And it is that it does not make any sense to mount solar tiles where not enough solar radiation is received.

The photovoltaic cell does not occupy the entire surface of a solar tile. Therefore, solar roofs require more extension to produce the same amount of electrical energy . So if our roof does not have enough square meters, it may be more interesting to resort to traditional solar panels.

Recovering the economic investment is generally faster in the case of choosing solar panels. However, the opposite can happen, for example, in new construction. Indeed, as we have already seen, solar panels alone do not serve as a roof, which implies more labor and materials in general (metal structure).

If the roof of the building is in good condition, it may not be justified to demolish it to convert it into a solar cover. On the other hand, in new construction, or reform that requires the complete replacement of the roof, the solar roof is undoubtedly more aesthetic, and possibly more profitable.

On the other hand, brands like Suntegra offer low-profile panels that are assembled like a meccano. These systems go quite unnoticed, which can be a good solution for roofs in good condition.

Solar roofs and photovoltaic panels are two solutions to produce electricity from a free renewable source, sustainable, and at the moment inexhaustible: the Sun. Covering the electrical needs of the home is possible in both cases. If, in addition to covering self-consumption, a surplus is generated, it can be sold to the electricity company. The latter only on roofs connected to the electrical network.

However, neither solar roofs nor panels are clearly superior alternatives to each other. Everything has its advantages and disadvantages. Its pros and cons. As a summary, it can be concluded that solar roofs are better than panels in new construction. And vice versa.

Basically these are some  Advantages and disadvantages of solar roofs.