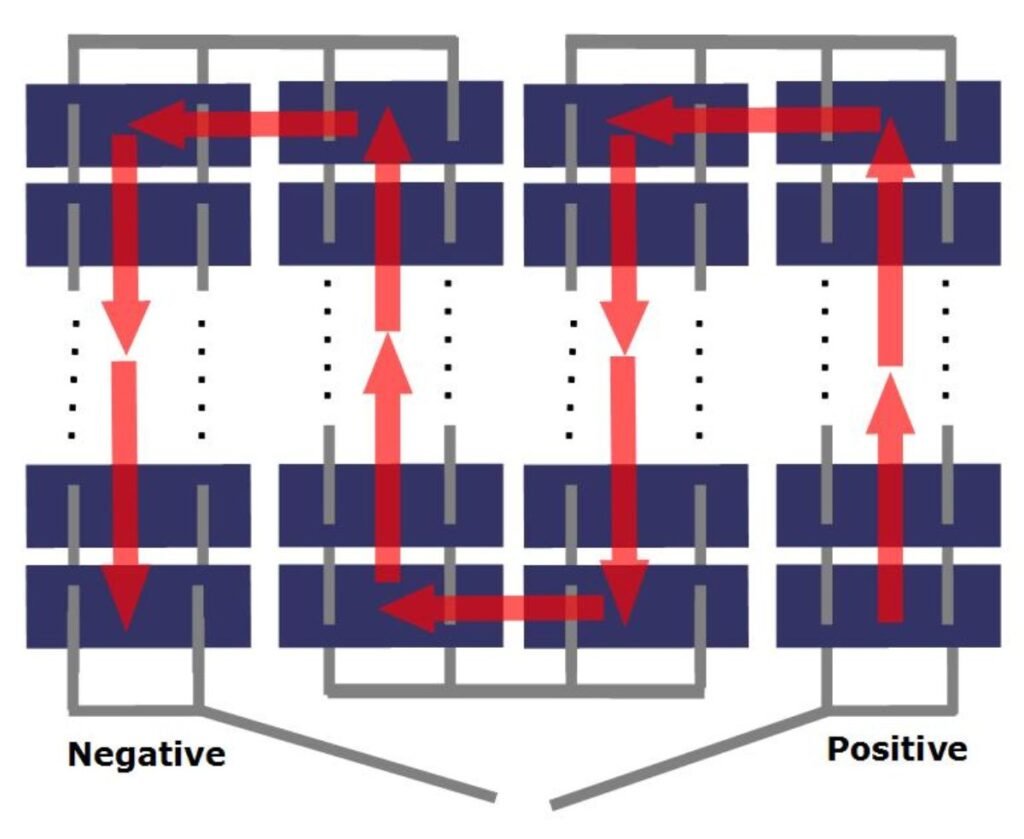 In this article we will deal with a subject that sometimes lends itself to confusion, the CONNECTION OF SOLAR PANELS IN SERIES AND PARALLEL.

A very discussed and not unjustified subject. With this you make the difference between a good solar panel installation or a “very good” one. But there are more misunderstandings about it than about any other topic. Let’s take it easy.

CONNECTION OF SOLAR PANELS IN SERIES AND PARALLEL

What is a serial connection?

A system connected in series is traditionally the most used system. Most solar panels only give a limited voltage (around 30 to 40 volts).

That is not enough to start a large investor. On the other hand, the same panels emit a high current (almost 10 amps). This high current in combination with the low voltage produces a great loss in the wiring or we have to use much thicker cables (and therefore more expensive).

A simple solution was to put the panels in series. The voltage increases, the current remains the same.

What are the advantages of a system connected in series?

The main advantage lies in its simplicity. Click on the plugs of the solar panels, connect them to a central inverter and you’re done. In terms of costs, you are certainly the cheapest. Above all, do not forget that a low purchase price can be a great advantage.

What are the Disadvantages of a serial switching system?

Unfortunately, there are some disadvantages rather than advantages. The main disadvantage is that in a series connection, the weakest link is the leader for the whole chain connection.

This means that when one solar panel supplies less energy than the others, everyone suffers for this.

When a part, or even just one of the panels is in the shade during part of the day, a system connected in series is not prudent because it decreases the production of electricity

But there is more to that with string systems. A chain system can fail, and therefore no longer, or produce very little due to a number of factors. If the central inverter fails, it produces nothing.

There are many components in the system that turn out to be a ‘single point of failure’; If something fails, the entire system fails.

One of those ‘single points of failure’ is the investor. This occupies a prominent place in the house and has some disadvantages, such as noise.

The investor will have to be replaced after 12-15 years because it simply breaks down. Include this replacement, or the price of a warranty extension, in your cost and benefit calculations …

Another disadvantage is the vision through the monitoring application. You only have an idea of ​​the performance of the whole system, so you can not see what is happening with the solar panel. If there is a problem with a panel that causes the entire system to malfunction, you will not notice it immediately.

And then something that everyone wants: security!

Those solar panels seem innocent and they are. 30 to 40 volts is not scary. But when you connect 12 solar panels, suddenly you have 300 to 400 volts, and that’s extremely dangerous!

The DC voltage can be deadly at 110 volts. And the most annoying: there is no fuse in the middle. The tension only goes down when the sun goes down!

What is a parallel connected system?

A system connected in parallel is a system with microinverters like the Enphase brand.
Behind each solar panel, place a microinverter that converts the 30 to 40 volts of the solar panel into an alternating current of 230 volts.

You can connect these parallel microinverters to each other on a collective cable with 230 volts. The voltage remains the same, the current counts each new micro that connects.

What are the advantages of a parallel connected system?

Each panel can lose its power. Shade, contamination or defects have no influence on the rest of the system.

Do the microinverters generate annoying noises?

There is no big central investor in the house. There is only one small box, the size of a router, in the meter cabinet for monitoring. Therefore, the system is practically invisible in the home and has no drawbacks, such as noise.

The performance is always higher than that of a system connected in series. Solar panels often have a positive deviation in power. This is lost in a string system due to the weaker link, but in a parallel connected system, this deviation is ‘collected’ and provides approximately 3% additional return.

In addition, microinverters start with a lower voltage. In the morning, the system starts earlier and leaves later in the afternoon.

The mics also know how to do something with him every dark winter day. All in all, that also yields a little more return. In practice, we see that a system with Enphase Micros produces approximately 10% more efficiency than a chain system.

In terms of security, things are fine. Direct voltage never rises above a 40-volt safe. One comment that is often heard is: “but then a 230-volt cable runs through my roof”.

The person who says that he apparently does not realize that a string system has a much more dangerous voltage on his roof. In addition, the cable in which the microinverters are connected is secured in the meter cabinet. Then, if something goes wrong, the fuse will blow and everything will be voltage free and 100% safe.

Can the photovoltaic system be added?

Enlarging the system when you want it is also extremely easy. You can expand an unlimited system with more panels of the same type or of different types and more microinverters.

It is not in vain that almost all housing associations opt for microinverters if they provide solar panels to their rental houses.

What are the disadvantages of a parallel connected system?

The vulnerability of the “many” electronic components in the ceiling is an argument often heard for not opting for microinverters. In Solar Bouwmarkt we find this information outdated.

In practice, it seems that microinverters consist of many fewer components than a chain inverter and that a microinverter of, for example, Enphase is extremely solid.

This is due to the semiconductor technology used. With a failure ratio of 1 in 4000, this technique seems to be many times more reliable than any other technique.

We have searched for a long time and we can only mention one disadvantage: the price is slightly higher than that of a serially connected system. And let’s be honest: the price is an important factor for many people.

Count honestly; The microphones last 25 years and you get a 20 year manufacturer’s warranty. So buy a maintenance-free system. With any other system, you must replace the inverter in approximately 12 years.

For a fair price comparison, you must add an additional inverter or an extension of the guarantee to the price of a serial or optimizer system. If you are a long-term planner and want to buy something beautiful, then it is worth considering how much a system with Enphase microinverters costs.

And then there are the optimizers. That is parallel, or not ???

Let me start by saying that I think the optimizing systems are brilliant. But let’s be honest and explain to the vendors who sell it as a parallel system how it really works. 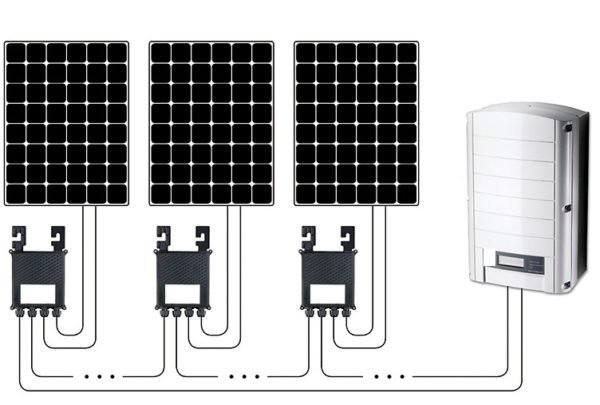 The optimizers form a series connection and a central inverter hangs at the end of the series! So that’s a system connected in series …

But why is a parallel connected system so persistent? This is because optimizers have almost the same advantage as “real” parallel systems with microinverters: shadow, contamination or defective panels have no influence on the rest of the system.

The disadvantage of the ‘weakest link’ in a chain system is eliminated by the optimizers. These ingenious devices do this by playing with the voltage of the solar panel.

Does the power decrease compared to the other panels? Then the optimizer lowers the tension. This allows the power to continue to function. Simple and brilliant physics through simplicity! It also works very well.

What are the advantages of optimizers?

The biggest advantage has already been mentioned. All solar panels give maximum efficiency. Of course, it is not the case that the optimizer can get more power than the sun puts, as I have heard a seller say …

As a result, the performance is usually slightly higher than with a series connected system because the positive deviations of the panels are “harvested”. We must be honest that these deviations, especially with the most expensive panels, are being reduced.

In terms of safety, much has improved compared to a string system. The optimizers provide a safe voltage of 1 volt until the inverter gives them a command they can start.

From that moment, a high chain voltage passes through the wiring. We can talk about ‘DC safe’ during the installation and the planned work.

What are the disadvantages of optimizers?

Even in a system with optimizers there is a ‘single point of failure’; The investor This however will break once and must be replaced.

So, be honest and include the price of the extension of the guarantee in your cost-benefit analysis.

In the field of systems design, there are some simple rules that you must follow. Consider the minimum and maximum number of optimizers in a string.

The optimizers use part (s) of the energy generated by the solar panel and the central inverter requires a considerable starting voltage. As a result, a system with optimizers will never achieve the same efficiency as a system with microinverters.

Safe DC only applies to planned work. If something happens accidentally on a sunny day with wires or plugs for some reason, there is still a very high and potentially deadly voltage.

In seri, parallel or optimizers, each has its advantages and disadvantages.

If the price is the most important factor, you are probably better off with a chain investor. If you are someone who likes to buy quality, then opt for a micro-investor system and with optimizers you can walk in the middle of gold.

Do not decide too fast! Put the options next to each other and perform a fair cost-benefit analysis for each system that includes the extension of the guarantee or the replacement of the investors and do not forget the greater efficiency of the optimizers or microinverters.