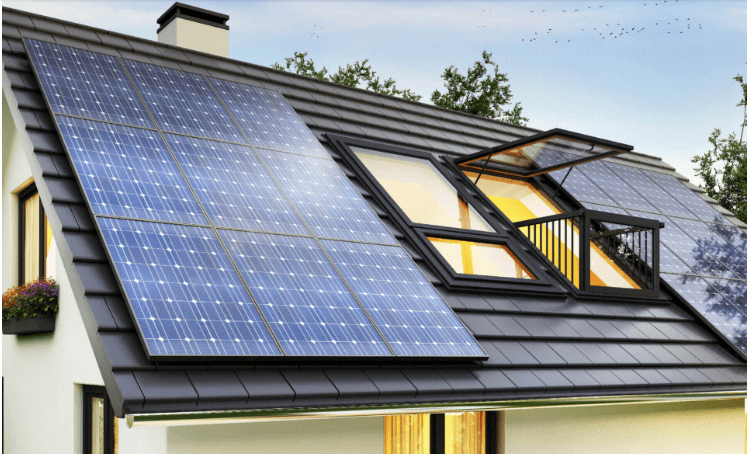 Photovoltaic cells are responsible for the conversion of solar energy into electricity as a result of the photovoltaic phenomenon. Find out how a solar cell is built and how it works.

What is a solar cell?

Regarding the efficiency of the cells, there are technologies with greater efficiency than those of silicon, for example, cells based on gallium arsenide. – which, however, for economic reasons, are practically not used in photovoltaic installations.

A silicon photocell is made of two layers of semiconductors: n-type silicon (where electrons are the main charge carrier) and p-type silicon (the “holes” are the majority charge).

The direct connection of layers of silicon type p type n causes the majority carriers (electrons for n and holes for p) to diffuse to the opposite, and this is how a depleted zone (or a barrier zone) is created.

Basically, a photovoltaic cell consists of a light absorbing top layer with one electrode, a crystalline silicon plate, and a metallized bottom layer, which is the second electrode.

A photovoltaic cell with a PERC layer differs from the standard one in terms of structure and therefore efficiency. This is due to the fact that classical solar cells absorb the sun’s rays to a limited extent and at limited electromagnetic wavelengths.

The PERC photocell has an additional layer of dielectric, that is, an electrical insulator, which functions as a power reflector. It is simply an insulating layer intended to limit the attraction of electrons to the lower aluminum electrode. In addition, as the name of Passive Emitter Rear Cell indicates, a cell with a lower passivation of the emitter: the lower passivation of the connector reflects the sun’s rays back into the cell, thanks to which they have an additional opportunity to generate energy.

In practice, this means that PERC solar panels are most efficient throughout the day, even early in the morning, at night, and on cloudy days. Sunlight is efficiently absorbed and converted into electricity.

Traditional photovoltaic cells have dimensions of 156 × 156 mm (M1 standard, although larger cells are increasingly appearing on the market). Those in the half-cut cell technology – 156 × 78 mm, which means that  on the same surface of the panel there are a double number of cells “cut” in half. The standard module consists of 72 cells and the cut cell half, 144 cells.

By dividing the cell in half, they reduce internal electrical resistance,  ensuring higher power output, higher efficiency, and reliability. Half-cut links do not heat up like standard links, thus prolonging their useful life.

It is important to note that these modules have been divided into two parts (duo panels). As a result, the frequent problem of partial panel shading has been eliminated.

Photovoltaic cell: what is happening inside?

The special structure of the photovoltaic cell and the properties of its elements cause a physical phenomenon to occur inside: the internal photoelectric effect. The photovoltaic phenomenon converts solar energy into direct current  .

The solar radiation that falls on photovoltaic cells is a stream of photons. When they collide with electrons, they transfer energy to them. The absorption of photons produces a pair of electron holes. The junction field transfers each of these charges to opposite areas: the electron to the n-type region, the hole to the p-type semiconductor region.

This separation of the pair of charges creates a potential difference that biases the junction in the direction of conduction. – the carriers enter the adjacent region and this movement of the carriers is the resulting electrical current. In general, a current is created, which is precisely the movement of electrons.

The photovoltaic effect produces a direct current that is then converted into alternating current by an inverter (inverter) or a microinverter.

The most popular cells on the photovoltaic market are polycrystalline and monocrystalline silicon cells. The main difference between them is the silicon production method for cell production. The process used also results in a different performance, appearance, and price.

Polycrystalline photovoltaic cells are cheaper, but achieve an efficiency of 14 to 16%. They have a blue color, square shape, and often visible clear edges of silicon crystals. The panels made from them form a homogeneous plate. Polycrystalline cells are a good option for people who have a large ceiling.

The price of monocrystalline photovoltaic cells is slightly higher, but they  have a much higher efficiency  (16-20%). Monocrystalline cells are black in color and have rounded, truncated corners.

This is because they are cut from the cylinder. That is why the panels made with them have a kind of dots on a black background. They are actually empty spaces through which you can see the bottom layer of the module. Monocrystalline cells are the best option for people who have a small ceiling because they spend more.

Amorphous photovoltaic cells are made of an amorphous silicon crystal. They have the lowest efficiency, in the 6-8% range, but they are also the cheapest. Amorphous cells are opaque and have a deep red color.