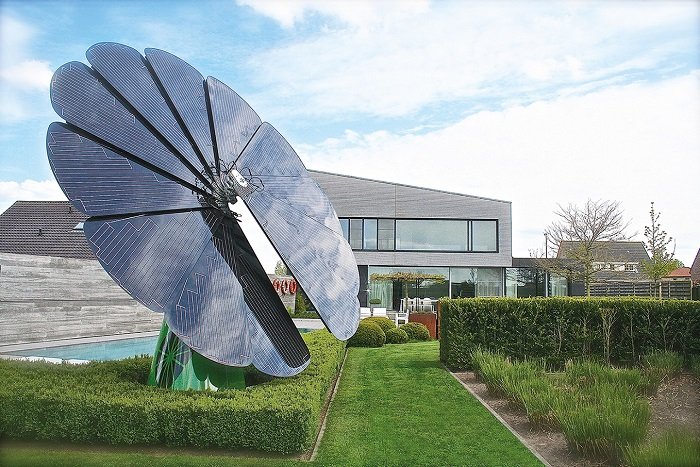 A field of fully mature sunflowers will face the same direction. Perhaps you have witnessed this phenomenon while driving down a country road. Something even more unique occurs among juvenile sunflowers, however, that is not noticeable in the time it takes to pass a field. If you spend a day looking at young sunflowers (or just setting up a time-lapse camera, or searching YouTube), you’ll notice that the faces of the flowers move with the sun, and after sunset, the ratchets return to where they started.

Sunflowers participate in heliotropism, a form of movement induced by stimuli dictated by the sun. Although there has been all sorts of research documenting why they do this and what happens to the response under various manipulated circumstances, there is one lesson to be learned: sunflowers that follow the sun grow larger and attract more pollinators. In essence, they are more efficient in achieving their floral goals.

The power of the sunflower

As the human race takes cues from the natural world and moves toward solar energy as a clean, sustainable option to solve our many problems, it seems that a few humans have taken the process a step further.

In Austria in 2010, the original SmartFlower concept was sketched out on a napkin. The designers wanted to emphasize two things: aesthetics and efficiency. They knew that having a product that was visually appealing would make them competitive in a market that had previously favored function over form, often making sacrifices in presentation for the sake of solar power. Efficiency, however, plays into several facets of SmartFlower and is the defining aspect of the product.

“SmartFlower” flower shaped solar panels are space efficient; the structure is an all-in-one solar system, which means that all the technical aspects of the product are housed in its base. All you have to do is plug in the product and you’re ready to go. Fewer parts means installation is a fairly painless process, supposedly possible in just a few hours. 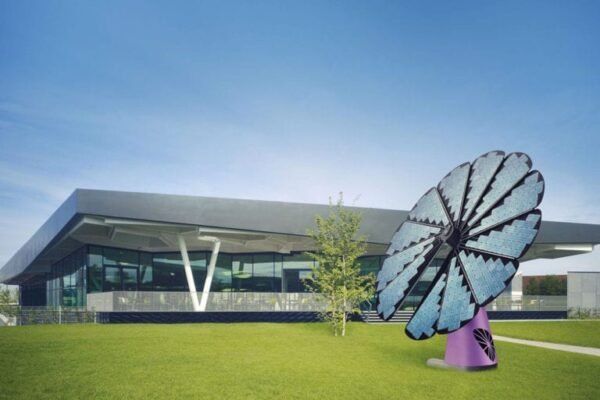 Achieving crowning efficiency, however, and linking the sunflower, comes down to product function. During daylight hours, the petals of the solar panel follow the movement of the sun in the same way that its inspiring yellow flowers do. During the night, the petals simply spiral on top of each other and fold down to minimize space. Whether it’s rainy or windy, the solar system is smart enough to keep its petals hidden for protection.

The oscillating face of the flower allows it to create 40 percent more energy than comparable panels. Fixed panels are by their nature unable to absorb the same amount of sun and cannot compete with the SmartFlower. Additionally, each time Smartflower is unfolded, small brushes clean the surface of each panel, reducing debris and further increasing efficiency. 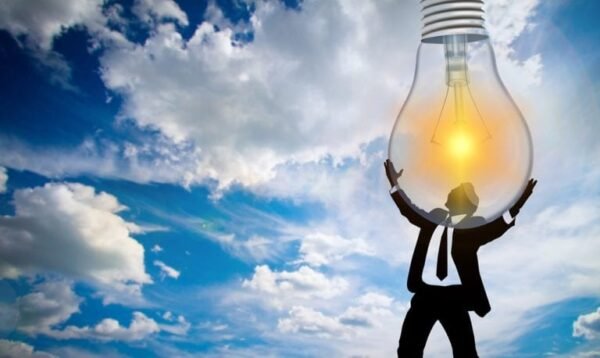 The advancement of solar technology may revolutionize the market. Solar energy is in a growth phase. With options already on the market for conventional panel systems, as well as various solar panels around the world, clean energy is poised to grab a larger share of the energy production market.

Currently, solar power accounts for 0.6 percent of electricity generation in the United States. The combination of rapidly falling prices and rising consumer demand is setting the stage for a continued rise in application.

The initial investment costs are high for both companies and owners, although the price is potentially more acceptable to the corporate world than to private citizens. However, once homeowners take the plunge, they can see their investment level in as little as 10 years, depending on a handful of factors. Federal tax credits and utility company incentives are making the option even more affordable.

Solar energy is on the verge of a revolution. As technology is adopted at an increasing rate, demand is driving companies to make technology more accessible and efficient. Industries are reimagining basic products to run on clean energy, and the private sector is seeing a growing number of options to “go green” at home. 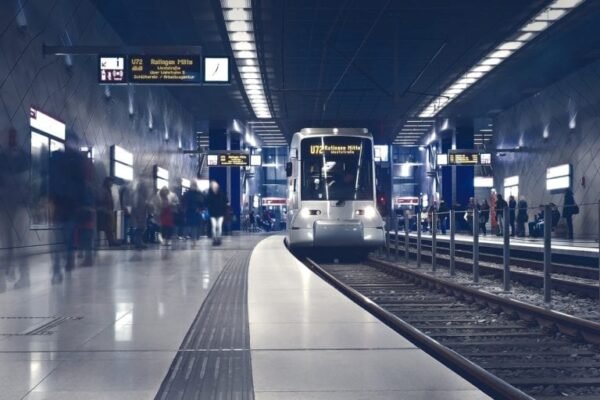 In 2016, Chile announced its intention to have a solar-powered metro system, the first public transportation system in the world to run entirely on solar energy. This year, the country presented a solar array capable of powering 42 percent of the metro’s energy consumption. Although it is not the only source of energy, it is a big step forward in reducing public transport emissions and energy consumption.

However, the verdict is on the solar roads. While there is certainly plenty of research going on from Montana to France to China, no one is really sure what the future of smart roads will look like. Potential benefits promise reduced infrastructure cost, automatic snow melting, and the ability to change lane markers as needed for construction or other hazards. However, detractors cite potential problems with traction, as well as the high cost of construction materials. In China, part of the test road was stolen. Although solar thieves are not likely to be a problem, the effectiveness of a solar collection system that is partially blocked from sunlight is in question, especially with the SmartFlower, 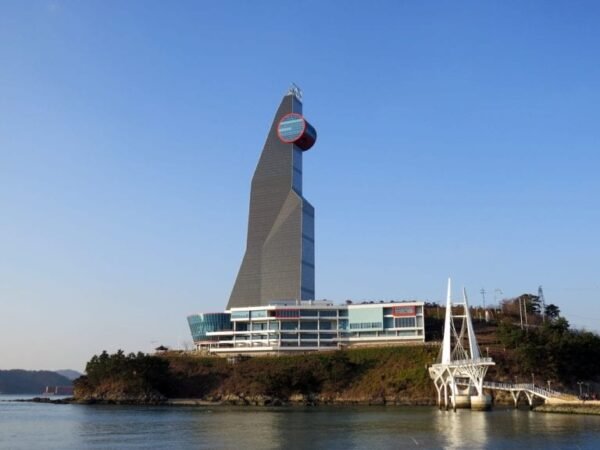 As the world becomes increasingly urban, planners and architects are changing the face of development. By focusing on proper size and better building materials, green buildings are optimized to provide the most efficient existence in their environment. Solar panels not only produce energy for the building, but also feed excess energy into the electrical grid.

With the addition of aesthetically pleasing (or at least more pleasing) solar flowers, the market may flourish even more. SmartFlowers can become a common sight in public or private spaces, dotting the landscape with their energy efficient technology and unique look.

However, solar panels are showing up in more places than just rooftops and roadways; technology is slowly but surely making its way into some unexpected areas.

Clothing is being modified to include solar fibers woven into the fabric. In the future, it may be possible to put your cell phone in your jacket pocket and have it charged! Although this may not be convenient for people who spend their days indoors, the app for military, backpackers, and trail guides is amazing.

Related: Solar panels are turning up in the most unlikely places

Speaking of backpacking, more and more camping gear is moving towards solar power as a power source. For those who enjoy the great outdoors, tapping into a natural power source only makes sense, and eliminates the need to carry power supplies or backup batteries. Various options are generally affordable due to their small size.

In much larger solar options, Japan introduces the world’s first solar-powered cruise ship. The Ecoship will run on a combination of solar, wind and natural gas power, and the cruise company expects emissions to be reduced by at least 40 percent. If all goes well, Japan hopes to have a fleet of five of these ships by 2020.

Looking to the future

There is no doubt that solar energy is taking the world by storm. As alternative energy solutions become a more pressing concern, companies are innovating and answering the call in spades.

The wobbly face of the SmartFlower panel may disrupt the industry’s progress, though not in a negative way. If more solar applications can take advantage of sun tracking, we may see solar power becoming more affordable as the technology becomes more efficient. Of course, certain things are stationary by necessity – roads that rotate are understandably impossible.

Yet flickering solar panels and other cues from nature may be the answers the industry is looking for. An emphasis on aesthetics and integration into the environment, whether as a focal fixture or covert power source, sets SmartFlower apart, and we hope that the luxury of designing solar power for our environment will become more widespread as solar power take root.