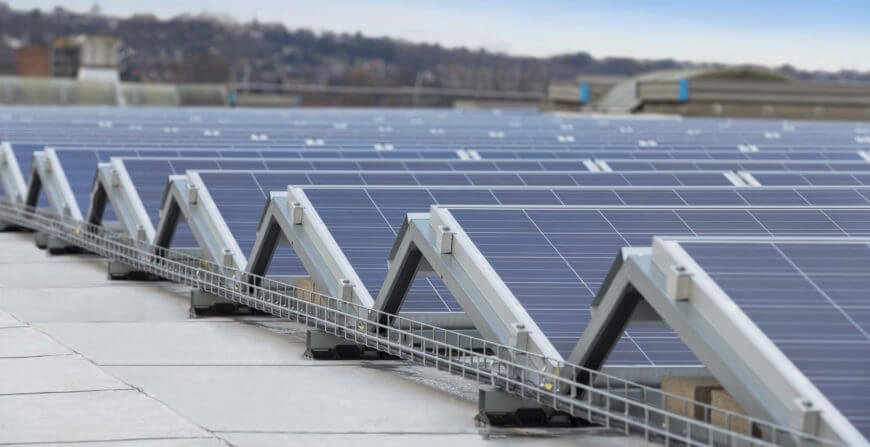 By the performance of its  solar panels,  we refer to the amount of  kilowatt-hours  (kWh) of electricity generated by its solar panels in a year.

HOW MUCH THE SOLAR PANELS GENERATE

If you know what a single solar panel generates, you can calculate exactly how much you need to cover your company’s energy consumption. Or it can verify if the real generation corresponds to what the solar panels for companies should generate.

First, you would expect the beautiful summer days in full sun to make your ‘little power station’ run at full speed, right? Not at all, because the hotter it is the less solar energy its panels generate.

Spring is the perfect period to generate solar energy. Just look at the chart below where you can see what average solar energy is generated per month.

With solar panels we distinguish between Watt peak (Wp) and kilowatt hours (kWh).

With kilowatt-hours, we indicate how much electricity is generated or used.

Formula for calculating the performance of solar panels .

We assume that its solar panels have a capacity of 250 Wp. This means that they generate 0.25 kWh in an hour under the ideal conditions.

Those ideal conditions do not always happen. Sometimes it is cloudy and it rains or the sun does not shine perpendicular to the solar panels. That is why we take into account a correction factor of 0.89. With this sum, you calculate how much your panels generate each year:

What influences the performance of your solar panels?

As we indicated, the climate influences the amount of solar energy generated by your company’s solar panels. In addition, there are some factors. We start with the sun.

A day bathed by the sun of 30 degrees without even a cloud in the sky is not the ideal situation to generate solar panels. Why not

During the STC (the standard test condition discussed above), the panels have a temperature of 25 degrees. As a standard, solar panels are 30 degrees warmer than the outside temperature and, therefore, can get quite warm.

When a solar panel is 50 degrees, the outside temperature is 20 degrees.

For each degree of heating of its solar panels, the yield in kWh is 0.4 percent lower. That’s why a sunny day is not the ideal climate for your energy production.

Clean air is important for the highest possible generation. Do you know those photos of cities in China with heavy smog? You bet that solar panels do not generate much there. 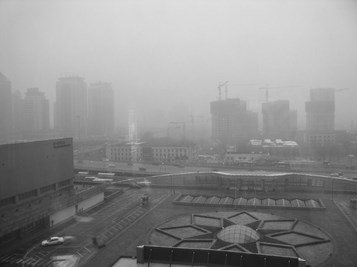 A Chinese city with a lot of smog.

Fortunately for us it is not as bad as in China, but in the Netherlands the sky is not always clear. Moisture can hang in the air, especially during summer days.

If there are particles or water vapor in the air, the sunlight is reflected, so there is less radiation in the solar panels. And then our solar panels generate less solar energy.

The slope or inclination of your solar panels

The position of your solar panels determines in part the amount of kWh that is generated. By position we refer to how the solar panels are tilted and in which direction they are placed: towards the south or the west?

There is an ideal slope for each direction. For example, when your solar panels face southwest, the ideal is an angle of 36 degrees. Solar panels deliver less on a lower or higher slope. A roof with solar panels facing south also produces more efficiency than a roof facing east.

Which does not mean that it is equally useful to install solar panels if the roof of your company is not oriented to the south. The following table shows the best combination in terms of direction and slope.

The energy efficiency in percentages by direction and slope.

Quality of your solar panels

The operation of solar panels deteriorates over time. Like any other technical product. A brand solar panels generate 20 percent less in its 25 years of life than in its early years.

Therefore, it is important to first buy a good quality brand and, secondly, keep it well. Consider an annual cleaning, since dust or leaves are left behind, so your solar panels absorb less sun and generate less.

You can clean the solar panels yourself or have a company do it for you. In terms of maintenance, your solar panels do not need much anymore. However, the investor needs replacement after ten or fifteen years.

Shadow on your business solar panels

Sometimes, some solar panels trap the shadow during part of the day, for example, through a tree or a building. The influence that this has on your generation depends on the investor you use: a serial inverter or a microinverter.

A series inverter (or chain inverter) is connected to several solar panels where the DC current produced is converted into alternating current (so that the current can be used).

With a series inverter, the shadow on a solar panel can guarantee that your entire system generates less energy. It works the same as with Christmas lights: when a light breaks, several lights do not work.

Microinverters can be the solution if your solar panels capture a lot of shade. There is an inverter connected by solar panel, so only the solar panel in the shade generates less. In the future, the whole series will no longer suffer.

Even if you have solar panels for businesses, you must apply for a commercial energy contract, because at times when the sun does not shine, you still want to provide electricity to your company. In addition, it is easy to see only the green energy supply, by choosing 100% green energy in our business energy comparator.

In this way, you only compare the sustainable supply of business energy suppliers and know which is the most economical offer for your business situation.