More and more people are installing solar panels on the roof to provide their house with electricity generated by themselves.

But, HOW DO SOLAR PANELS WORK? What is a solar cell? Why do you need an investor?

HOW TO SOLAR PANELS WORK?

This article provides answers to some frequently asked questions about the operation of solar panels.

You do not buy solar panels every week. Therefore, read well and always choose a reliable company if you have the implementation done.

How does a photovoltaic solar panel work?

Solar panels consist of many solar cells that (mostly) consist of layers of silicon. When the sun shines on this, an electrical voltage is created in the solar cell.

This is also known as a photovoltaic response. That is why solar panels are also called photovoltaic panels. All the solar cells in a panel that are connected to each other will start to run an electric current. This is 12 or 24 volt DC electricity.

You need an investor to be able to use this electricity. An inverter converts low-voltage direct current to 230-volt alternating current. This is the same electricity that comes from its output.

Solar panels provide the greatest amount of energy when they are located to the east, southeast, south, southwest or west. The ideal angle of inclination for an inclined roof is 35 °.

Solar panels with a slope between 20 ° and 60 ° provide almost the same efficiency. The return in these cases will deviate approximately by a maximum of 10%.

Orientation towards the north, northeast and northwest is not recommended. Flat roofs are also suitable. With the scaffolding on which the panels are mounted, an ideal angle and slope can be chosen.

How does a solar panel work when there is no sun?

Even if there is no direct sunlight on the solar panels, electricity is generated. During cloudy days, sunlight (diffuse) still falls on the solar cells. Solar cells work very well when the sun does not shine.

Does the temperature influence the operation of the solar panels?

How does an investor work?

An important part of a solar panel system is the inverter. An inverter converts the 12 or 24 volt direct current produced by the solar panels into 230 volt alternating current.

An inverter is important when a solar panel system is connected to the power grid. It forms the heart of the system and plays an important role in the performance of solar panels. Therefore, an investor is also the weakest link. In general, you must replace the inverter once during the lifetime of the solar panels.

The duration of an investor depends on the type of investor:

An inverter should not get too hot. If the electrical performance of the solar panels is very high, the investor must convert a lot of electricity. This will make the inverter hot and, when that happens, it will become less efficient. When you place the inverter, therefore, you prefer to place it in a place where air can easily pass through the inverter. Read all about  solar panel inverters  .

Efficiency and lifespan of solar panels.

The efficiency of solar cells in solar panels degrades a little each year. The return usually falls by 1% per year for the first 10 years and by 0.7% for the next 15 years.

After 25 years, solar panels often still have a minimum efficiency of 80%. Therefore, solar panel producers often offer a guarantee of energy. The power guarantee indicates the amount% of the original power that the panels still deliver after a certain period.

As soon as this is not the case, you can get a solar panel replaced by the producer for free.

What are watt peak wp?

As with all electrical appliances, the energy of the solar panels is expressed in watts. However, electricity production is not uniform because the amount of sunlight is constantly changing.

That is why the maximum capacity is indicated for solar panels: Watt peak (Wp). The maximum number of watts of a solar panel indicates how many watts that panel can generate at least with solar radiation of 1,000 watts / m² and a temperature of 25 ° C (comparable to a sunny day but quite cool in the middle of summer).

Panels in the Netherlands now produce on average around 275 WP. This means that they generate approximately 275 watts under practically ideal conditions, or 0.275 kWh per hour.

What types of solar panels are there?

The solar cells are made of silicone material. The difference in the production process determines the difference between the types of solar panels: monocrystalline or polycrystalline.

In addition, there are also thin film panels that are made of other materials. Read more about SOLAR POWER PANELS

How do you make sure that the solar panels work properly?

There are quite a few ‘cowboys’ in the market. Since the solar panels have to last 25 years, it is very important that the installation is carried out by a reliable and experienced part.

So, read the experiences of other homeowners in the GreenHome market about installers and see what certificates they have.

For example, companies that have the Solar Test Certificate or the SEI Recognition are experts and have had to do a theoretical and practical test.

The maintenance of solar panels is hardly necessary. There is a protective layer on the solar cells that ensures a clean panel after a rain shower. Solar panels that are on a flat roof in an east-west arrangement should be cleaned occasionally at the edges. Due to the low angle of inclination, dirt can accumulate here.

TIP: everything you need to know about solar panels

How do solar panels work in a house?

Photovoltaic panels are the first component of a solar installation: in a casason responsible for generating electricity under the influence of sunlight.

A solar panel or photovoltaic panel consists of sixty photovoltaic solar cells (‘photo’ for  light  and ‘voltaic’ for  electricity  ). These plates with an area of ​​approximately 10 cm 2 have a thickness of only 0.2 to 0.4 mm.

It is important to keep in mind that these solar cells generate energy under the influence of sunlight and not solar heat. That means it often produces more energy on a cool, sunny spring day than on a hot summer day.

How exactly do solar cells convert light into electricity? That has to do with its structure. In general, solar panels consist of two layers of silicon.

When sunlight falls on the cells, an electrical voltage is created between the two layers of silicon. The solar cells are mounted in series on a panel and the solar panels are also interconnected. 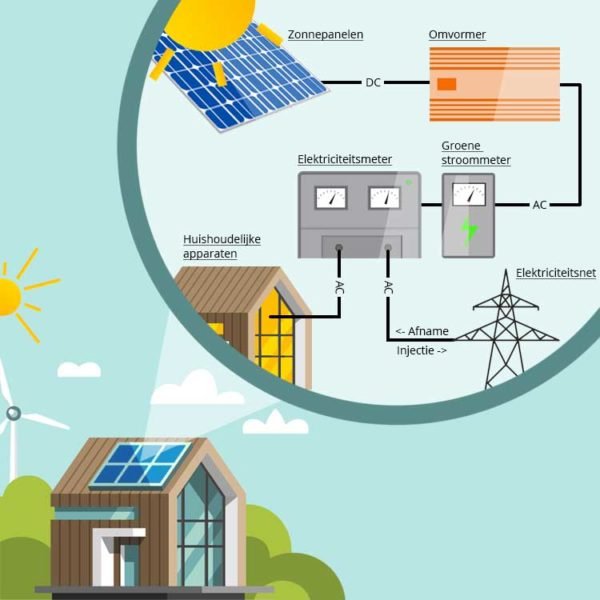 In this way, the generated direct current can move from cell to cell and from panel to panel, finally reaching the second component of the solar installation: the inverter.

Components and operation of a solar installation.

How does a solar panel inverter (or inverter) work?

An MPP tracker (maximum power point) connected to the inverter ensures that the panels reach their maximum efficiency and also assigns system performance.