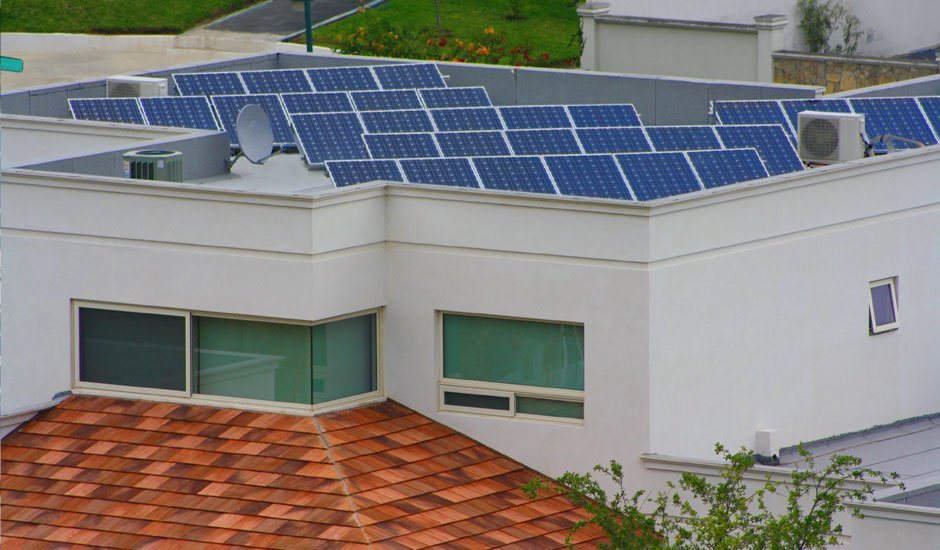 How to calculate the capacity of a solar panel

In the present article, we are going to exemplify the  calculation of the solar panels necessary  for a system of autonomous solar panels that we wish to use for an isolated house, or any other property, that demands a certain amount of energy.

The structure of the article will present how the solar panels are connected in series or parallel, how much energy a solar panel produces and, depending on that, how to calculate the photovoltaic plates needed for a house, for example.

It is an introduction that the use of high quality solar panels  is of vital importance for an energy generation installation of this type . Compensates making a simple search online looking for comments and references before proceeding to a purchase.

It is also advisable to know the market trends and know which  solar panels are the most efficient that exist  and that, consequently, are the ones that generate more energy per square meter when we make the necessary calculations.

Energy generated by a solar panel:

We take it for granted that we already know how solar panels work, and if not, you can find plenty of information in our blog. So, to  calculate the energy generated by a solar panel  during a day (E panel ), we must use the following equation:

Being, Ipanel and V panel  the maximum current and maximum voltage of the panel, HSP are the peak sun hours, and 0.9 would be the coefficient of performance of the panel (typically 85-90% when discounting already the losses). The resulting energy would be expressed in Whd.

That would be the energy generated by a single solar module, but if for example we want to know  how much energy is going to generate a photovoltaic self-consumption installation with several solar panels , we would simply have to apply the following formula:

The  electrical symbol  that is usually used to graphically represent a photovoltaic panel is the following:

Connection in series and parallel:

In the majority of photovoltaic projects, especially isolated solar installations and depending on the power of the installation, it will be necessary to associate several plates in series or parallel to obtain the desired voltage and current levels.

For the connection of photovoltaic solar panels, there are three possible options:

Consider that we have an isolated photovoltaic installation composed of 3 branches in parallel with, for example, a 12V solar panel, with a maximum nominal voltage of 18.4V and a maximum current of 8.37A.

If there were no losses of any kind (hypothetical case), the connection scheme of solar panels in parallel could be represented as follows:

As we can see in the diagram, in orange we have the output values ​​of the photovoltaic generation system (the so-called 12V solar panels to be used for isolated systems with batteries), where the output voltage that we have would be 18.4V (because the panels are connected in parallel) and the current 33.48A (since being in parallel the current of each branch a, b and c is added).

The generated tension will be equal to the sum of each of the tensions of each panel that makes up the branch (string), or in other words, we multiply the unit tension by the number of panels of the branch, since we must always connect panels of the same characteristics with each other. We see it then with an example?

Consider that we want to have solar panels for motorhomes, consisting of a branch with 3 panels in series of plates with 37.45V voltage and 8.98A maximum current. If there were no losses of any kind (hypothetical case), the connection diagram of the serial plates could be represented as follows: 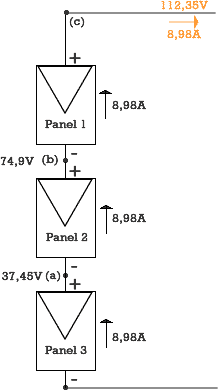 As we can see indicated in orange, at the exit of the branch (c), we will have the tension resulting from the sum of each of the voltages of each panel that make up the branch in series (112.35V) and the current will be the same as that of one of the panels (8.98A).

Surely you will be thinking,  What happens if a panel breaks down and I have to change it for a different one? . Well imagine that, since we do not find the same panel on the market, we are going to buy solar panels with the following specifications: 31.40V of voltage and 9.33A of maximum current.

What will happen when connecting this module in series with the other panels already installed, is that the entire branch (string) will be put to work at the current of lesser magnitude, in our case, as the SolarWorld module SW 290 has a current ( 9.33A) greater than the modules already installed (8.98A), the installation will not be modified.

If our module has a current lower than those already installed, it will affect the entire string and there will be a production drop, therefore it is not advisable to use replacement modules with currents lower than those of the installed modules. 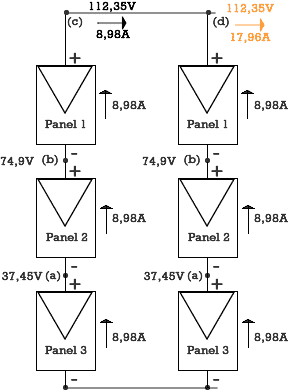 As we can see in the electrical diagram, in the point (node) (c) of the first branch (string) we have the sum of the voltages of the panels and the unit current, in the point (node) (d), which is the output of the system, we will have the same output voltage of each of the branches, but as output current will be the sum of the output current of each of the branches, as the two branches are connected in parallel.

Practical example: Energy generated by a system of solar panels

Well, once you understand how much energy a photovoltaic solar panel generates and the types of connections we can make, we will finally expose a practical case where we put into use what is explained and, in passing, that will help anyone to calculate the solar panels necessary for your photovoltaic solar system.

Let’s say we are going to buy solar modules SolarWorld Sunmodule Plus SW 260 Poly. This model has the following characteristics:

And let’s say that our system consists of 10 SolarWorld SW 260 Poly panels connected in 2 branches in parallel with 5 panels in series per branch.

We are going to calculate then, in function of the explained thing until now, how much energy we are going to obtain of our panels.

We remember that, to know the energy generated by our panels, we have the formula:

In this case, since we have 2 branches in parallel, with 5 panels in series per branch, we can easily calculate the generator-photovoltaic  and the generator V -photovoltaic . If we consider an ideal environment (without losses), we would have to:

Note: We are always considering that all the panels used are the same and that each branch has the same number of panels connected in series.

Thus, the energy generated daily, if we are in an area with 4 HSP, would be:

In this way you can calculate the solar panels needed for a house, a hotel, a factory … etc.

Another Example: How many solar panels do I need to generate 1 kW of power?

In this case it is much simpler. If you want to generate 1kW of power with solar panels, at least at the time of maximum irradiation, simply divide that power by the unit of the panel.

That is, if you have a solar panel with 300W of power:

If, on the other hand, what you need is to know how many solar panels you need to generate 1 kWh, that is, 1kwh of energy, then it is the same as the previous example where it was calculated 9,46kWhd but for 1kwh.

How do solar panels work when connected to a regulator and battery?

In principle, if the regulator is a PWM (Pulse Width Modulation) regulator, it only has one diode inside it, therefore, the solar panel operates at the same voltage as solar batteries.

This means that the solar module does not work at its maximum power point, but instead works on the one that imposes the battery according to its state of charge, producing a loss of power. That is, the output voltage of the panel is limited by the voltage of the battery.

If we are going to buy a PWM charge regulator, it is able to completely fill the battery by introducing the load gradually, in pulses of tension, in the flotation phase and absorption phase (total filling). This occurs because the current is introduced little by little until the battery is filled optimally and stable.

So, if we have a panel of 18.4V maximum voltage and the regulator the maximum absorption load to the battery is 14.2V, what is produced is that the module does not work at its maximum power meaning a small loss of power. Energy.

Now let’s say that we are going to buy an MPPT solar regulator, in this case the energy that enters and leaves the regulator is the same, as in the PWM regulators, but the voltage and current are different from one side to another . This is achieved by increasing the solar panel voltage and  increasing solar production  with respect to PWM regulators.

In this case the regulator is able to always work at the point of maximum power of the panel without having any type of loss.

Our company specializes in the sale of solar panels, if you need help to calculate the solar panels necessary for your photovoltaic installation, our technical department will help you with pleasure and we will send you our best offer of supply.

Other articles on solar panels:

If you want to delve a little more about qualities in solar panels, technical concepts and so on, you may be interested in other articles that we have published.

These are the other  reports on solar panels available :