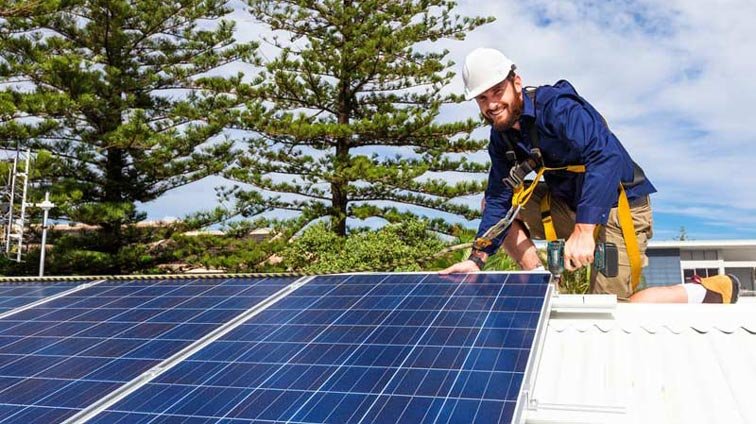 Photovoltaic solar energy represents one of the most attractive alternatives to conventional energy, being possible to install solar panels in a home to transform the sun’s rays into “natural fuel” that feeds the electrical installation.

How to install solar panels in your home without electricity supply?

Many times, due to ignorance or lack of time, the services of professionals are hired to install solar panels at home, but the reality is that it is not a difficult task and by following a few simple steps, a solar installation can be carried out without having a high knowledge of electricity. . We tell you what you need to mount your solar panels and join the consumption of renewable energy.

Determine the power and panels needed

Before carrying out any installation, it is important to analyze the existing energy needs in the home or space for which the energy is going to be needed. The wide variety of models and powers of solar panels allow you to choose the number and type of panel that best suits the required characteristics.

The inclination of photovoltaic solar panels varies depending on the region in which they are placed and the time of year. The incidence and solar radiation is higher in the southern areas of Spain and lower in the northern areas. Likewise, the first premise is to install solar panels facing SOUTH whenever possible, in order to capture the sun’s rays for as many hours a day.

If you want to produce more energy during the summer, the panels should be installed with a slight inclination in order to absorb the greatest amount of solar energy, due to the high elevation of the sun at this time.

On the contrary, if you want to produce solar energy throughout the year more or less equally and above all you want to capture as much as possible in times of fewer hours of sunshine (in winter) even if this is to the detriment of capturing less energy in the total year, the photovoltaic panels must be more inclined to be able to receive a greater amount of solar rays.

What is normally used is an average fixed inclination of about 30º in order to capture the maximum energy throughout the year .

Installation of the charge controller

Also called charge controllers, these devices are responsible for regulating the voltage that connects the panels with the batteries to charge them correctly. A solar installation may need a PWM solar charge controller or a regulator with a power maximizer or MPPT .

This device allows us to control the charge of the batteries so that they are charged with the appropriate voltages and thus take advantage of the maximum possible solar energy.

It is normally advisable to always install a quick disconnection element at the entrance of the panels in the regulator, in order to be able to disconnect the panels quickly if necessary and without leaving any bare cables hanging. For this you can use a fuse, a thermal magneto or similar.

The inverters are transformers from direct current to alternating current and allow the energy stored in the batteries to be used to provide an electrical supply of 230V just like the one we would have from the utility company.

There are two types of inverters :

Batteries are a key element of the solar installation as they store all the electrical energy generated by the panels. OPzS batteries and OPzV gel batteries are the most used in photovoltaic installations thanks to their long useful life. The basic difference between one and the other is that the Gel ones are a little more expensive but hardly need maintenance, while the OPzS ones are cheaper and the most used by far but require little periodic maintenance. It is important to choose a good quality battery that supports normal charge and discharge cycles in order to ensure perfect operation throughout its useful life.