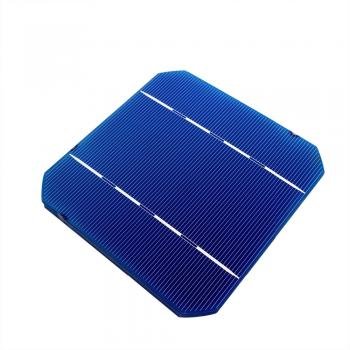 The compounds of a material that has a photoelectric effect absorb  photons  of light and emit electrons. When these free electrons are captured, the result is an electric current that can be used as electricity. A photovoltaic panel consists of a group of photoelectric cells forming.

The   average conversion efficiency obtained by commercially available photovoltaic cells produced from  monocrystalline silicon  is lower than that of multilayer cells, usually gallium arsenide. Currently there are also new technologies in the production of  solar panels  that do not use  silicon , for example, with semiconductors cadmium telluride, gallium arsenide and copper diseleniur in indium.

Description of the photovoltaic cell

The most common photovoltaic solar cell is a  crystalline silicon sheet  with an approximate thickness of 0.3 mm. The manufacturing process is of a sophisticated and delicate level in order to achieve a homogeneity of the material.

The electric field is generated from the different polarization of two areas of the  photovoltaic cell . Generally, the upper part has a negative character and the rest positive to create the pn junction.

It is achieved, thus, that one of its areas has:

Due to this difference in  electrical charge  in the material, the electric field responsible for pushing the electrons out of the cell through the surface of the N layer is produced, which implies the establishment of an electric current.

The solar cell is equipped with electrical contacts to channel the energy it produces when it is illuminated. These contacts are designed in a branched way (on the sunny face). There are two of the main ones and, in addition, there are the ramifications that unite them to better collect the electrons in the entire surface of the cell. The objective is to combine a good electrical contact, low resistivity and make the minimum shade so that the  photons  reach the active material of the cell.

On the back side, the contacts usually form a tight weft or even a continuous sheet that allows the reduction of the internal resistance value.

Working principle of the photovoltaic cell

When a photovoltaic solar cell is connected to a load or consumption and, at the same time, is illuminated by the  Sun , it generates a potential difference between its contacts that causes the circulation of electrons through the charge.

Under these conditions, the cell functions as a current generator. Next, we will describe in a little more detail the different processes that make it possible:

We can say that the current generated by a photovoltaic solar cell illuminated and connected to a load is the rest between its gross production capacity and the losses by recombination between electrons and  photons .

They are used to replace  batteries  (energy is by far the most expensive for the user), cells have invaded calculators, clocks, devices, etc.

It is possible to increase its range of use by storing by means of a (capacitor or   electric battery ). When used with a device to store energy, a diode must be placed in series to prevent system discharge during the night.

They are used to produce  elec t ricidad  for many applications (satellites, parking meters, …) and for powering homes or public network in case of a photovoltaic solar plant.