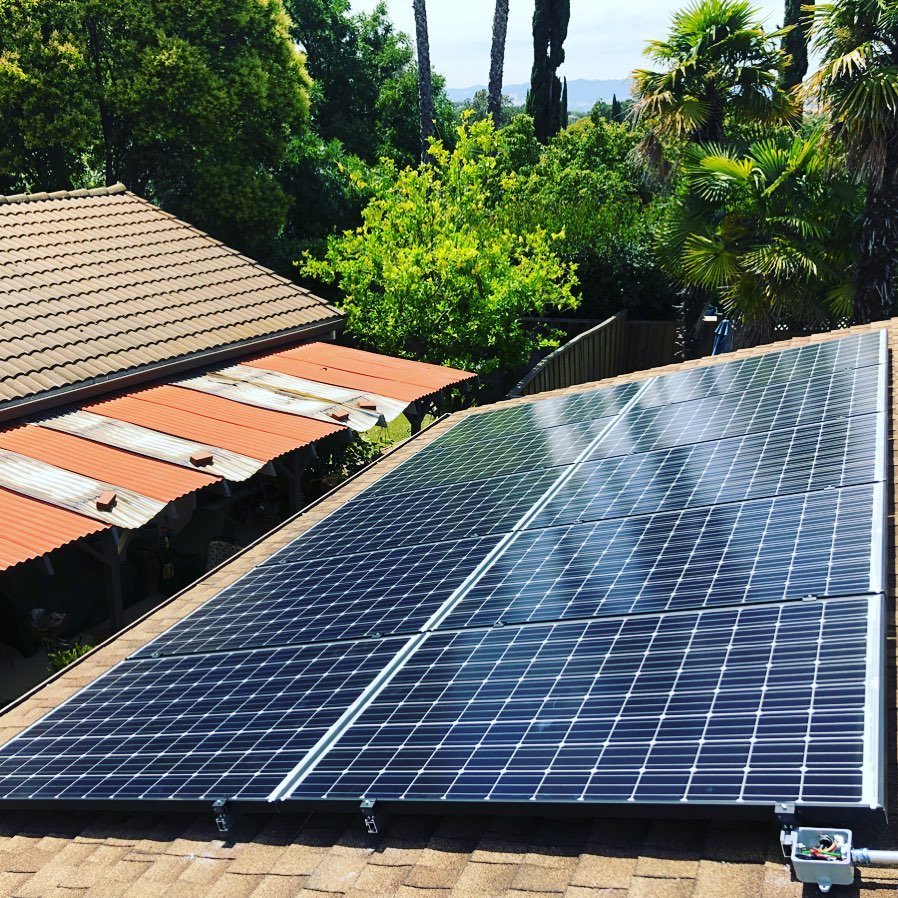 Electricity is getting more and more expensive and there are so many free sources! Wind, water, geothermal, solar energy … Just choose. Exactly, but what to choose? In our climate, where it is not too windy and not too hot, is it possible to supply renewable energy, for example, to a summer house? Certainly yes. In the long run, not only will it pay off, but we will also be committed to protecting our environment. Today we will try to answer how to do it using solar energy.

The principle of operation of photovoltaic cells and the entire system.

Next I will explain to you about the principle of operation of a solar cell.

A photovoltaic cell is a silicon semiconductor wafer within which there is a potential barrier (electric field) in the form of a pn junction (positive – negative). Solar radiation incident on the photocell expels electrons from their place in the semiconductor structure, creating pairs of carriers with opposite charges (negatively charged electron and positively charged, “hole”, formed after their breakdown).

These charges are then separated by the electric field present at the pn junction, which causes a voltage to appear in the cell. It is enough to connect a device that consumes energy to the cell and electric current flows. Photovoltaic cells are usually made of silicon, the second most abundant element on Earth, after oxygen, which is found, among others, in  sand.

Types of photovoltaic cells and their application. 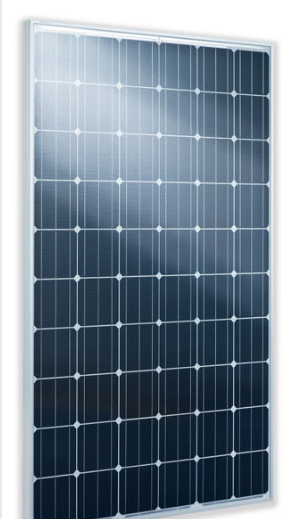 IBC MonoSol 230ET – Monocrystalline photovoltaic panel with a power of 230 W. The panel is intended for systems that cooperate with the electrical network 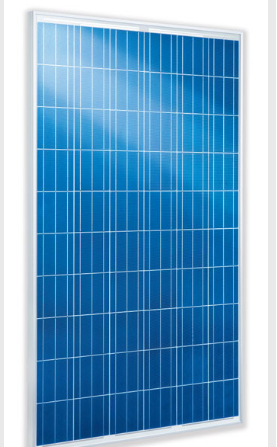 IBC PolySol 220TA – Polycrystalline photovoltaic panel with a power of 220 W. An excellent source of electricity with an efficiency of up to 16%.

The possibilities of using photovoltaic systems are endless. The main advantage of the installation of photovoltaic cells is its reliability, lightness and the possibility of obtaining free electricity with grid parameters for economic purposes in a clean, silent and practically maintenance-free way. Therefore, they are increasingly common in systems connected directly to the electrical grid, as well as in autonomous generation systems. They power street lamps, traffic signs, weather stations, radio-telecommunications transmitters, cameras and increasingly often many device systems in domestic applications.

The efficiency of the system depends mainly on the insolation obtained annually at the installation site. The greater the number of sunny days and the stronger the radiation, the greater the ability to obtain electricity from a given installation. A very important element of the assembly is also the direction and the angle of inclination of the photovoltaic panels; We will not place them on the north side of the hill or in a plaza shaded by trees or buildings on most days. Roofs or facades are a perfect place to install panels. Today, it is possible to build an office building with entire walls (including the glass surface) covered with photovoltaic cells.

The production of electricity with the help of solar cells is relatively efficient, amounting to 13-15%. This relatively high efficiency is due to the fact that the energy from solar radiation is converted into electricity without the use of heat. Remember, however, that individual photovoltaic cells are characterized by their low power, so to obtain the desired power values, they must be connected in parallel or in series in so-called panels or modules. This fact is the biggest practical disadvantage (apart from climatic variability) of the system. The power of the device translates directly into the space it occupies. The largest solar power plants are thousands of cells that occupy square kilometers of surface area. However,

Principles of the selection of the system and its efficiency.

By using one of the above criteria as a starting point when designing a photovoltaic system, we can choose a solution that optimally meets the inverter’s requirements.
The off-grid system, which includes energy storage batteries, is used with relatively low energy consumption (single-family homes, summer houses) or in situations where it is impossible or very expensive to connect the electricity grid to the installation. In this system, the energy stored in the batteries is transferred directly to the receivers connected to the electrical circuit of the cell. The off-grid system can also be configured to connect to the home network to provide electricity to selected electrical circuits.

The grid-connected system is definitely safer and more profitable: the energy in the cells is connected to the electrical grid. This option allows you to sell surplus power and, more importantly, direct power balancing – power supply from the utility grid in case the cells are supplying too little power.
The configuration of the cellular system depends mainly on the power of the receivers to be included in the circuit, that is, the demand for electricity. We can distinguish three ways of creating a system:

1.  Simple system  : the cells directly feed the devices; in this case, the system consists only of cells and a controller. This system will only work if the loads are powered by low voltage direct current.
2.  Moderate system – as in the simple system, the cell is connected directly to the receiver. The only difference is that the system is equipped with an inverter that converts the direct current from the controller into alternating current with mains voltage (230 V). Thus, we can supply devices adapted to be powered from the public network. These are the least safe ways to use the sun’s energy: the power supply ends when the sun sets or it is cloudy.

3.  Professional system – allows you to store energy. This system includes all the elements that exist in the moderated system. Its additional component is the batteries that allow it to store the electricity generated and use it when needed. It can be used in the entire spectrum of solutions, from the smallest to the largest installations, depending on the surface of the panels and the capacity of the batteries.

Moderate and professional systems can operate both connected to the public grid (networked) and as a standalone power source (off-grid). 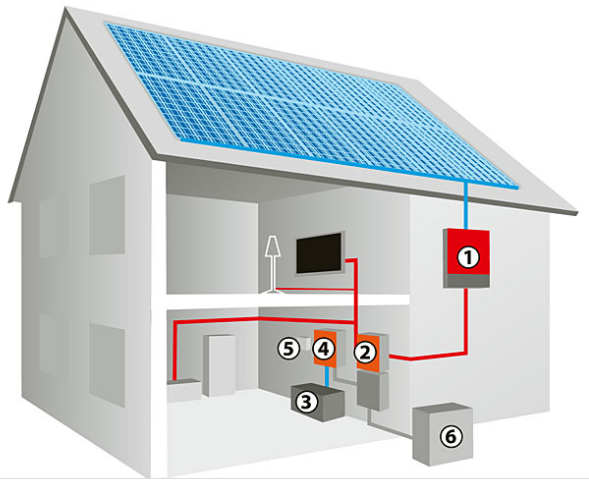 The size of the load on the power supply system is the most important factor in determining cell power selection and subsequent system operation. It is assumed that for a simple and moderate system, the power of the cell should be at least twice that of the receivers connected to the cell circuit. In a professional system, there is no such dependency, because part of the load is absorbed by the batteries that supply power to the receivers, even if there is no sun. Therefore, it is assumed that the power of the cell should be 30% greater than the power required by the receivers.
In addition, a very important element is the power of the inverter, which must be at least 20% higher than the load power of the power system.
The above assumptions, however, are “market average,” so each investment requires professional consultation. Knowing perfectly the characteristics of the devices of the individual companies, the location of the investments, our financial possibilities will better select the devices “tailored” to our energy needs.

Integration with the electricity grid

Photovoltaic systems connected to the electrical network require adapting their operation to their characteristics. This is essential when you plan to sell excess electricity to your local power distributor.
An inverter is used to convert the direct current obtained from the photovoltaic modules into alternating current with the characteristics of the grid current. It is one of the components of the entire photovoltaic system. Modern inverters automatically “scan” the parameters of the power grid, adjusting to its parameters.
Naturally, it should be remembered that there are adequate regulations that define the possibility of selling energy from a renewable source, such as solar. Before deciding to invest, contact the local network operator for information on the possibility of connecting our facility to the public network. There should be no problems with the sale of energy: the demand for “green” energy in Poland is high and legal regulations mean that it will grow from year to year. However, remember that the efficiency of small installations allows them to be treated as an additional source of energy and not as a mini-plant designed to generate profits.

Standards and certificates valid on the Polish market

Currently, all the components offered in photovoltaic installations are manufactured in accordance with European standards and are CE certified.

The efficiency of the system, which translates directly into recovery time, is directly related to the amount of sun in a given area. The average annual amount of solar radiation energy in Poland ranges from 950-1150 kWh / m2. On the other hand, the annual average number of hours of sunshine is 1600. Assuming that there are 8,736 hours in a year, solar systems have an efficiency of 18-20%.
The disadvantage of the current system is that due to the low popularity of this type of installation, devices for producing electricity from solar energy are relatively expensive. Therefore, the cost of generating electricity per KWh remains high and translates into a long payback period. It can be from a few to several years. Naturally, the payback period must be calculated individually, depending on whether the facility will be used for private purposes or for profit.
Photovoltaic systems in our country are still underestimated. Unlike the government of our western neighbors, so far there is no well-developed system of subsidies for photovoltaic installations in the country. Fortunately, in some Polish cities, photovoltaic energy has already been included in the municipal subsidy system, which should make institutions, companies and individuals more attractive and stimulated by this form of electricity generation.