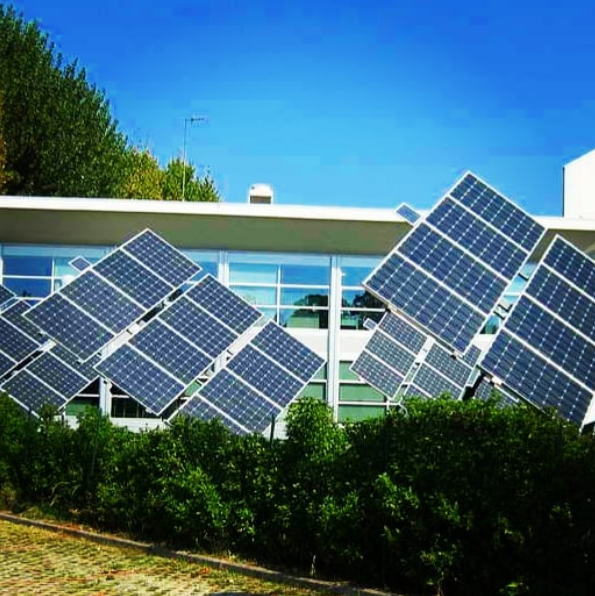 On this page you will find a summary of how it is and how the devices that a photovoltaic solar installation (ISFT) have works.

For more information on each of the devices visit the links to each device that you will find in the explanations.

A photovoltaic solar installation (ISFTV) produces electrical energy in the form of current that can be used to supply generated energy to the electrical grid or to power an autonomous system.

The answer is yes, since there is the possibility of exploiting photovoltaic installations for another purpose,  the sale of electrical energy .

In summary we could say that there are  3 types of photovoltaic installations :

– Autonomous installations in DC. It is NOT commonly used.

– Installations connected to the network.

These last two and their components will be the ones we see on this page.

They are photovoltaic systems that are used to  supply electrical energy to isolated receivers, such as traffic signals for example or isolated homes that do not have connection to the electrical network of distribution.

They are usually low power, from a single plate that generate tens of watts to several photovoltaic panels that can generate powers of 10Kw.

The latter are the most used and the ones that we are going to see below. 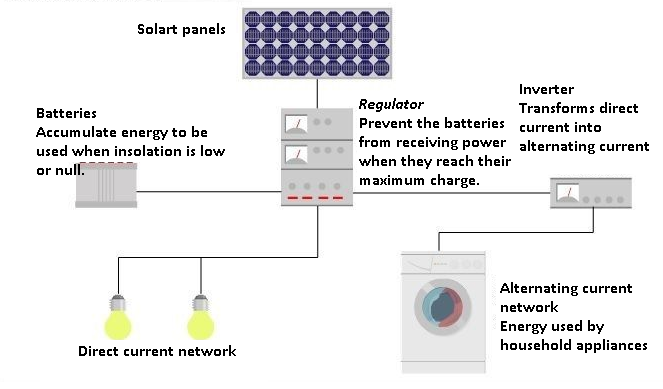 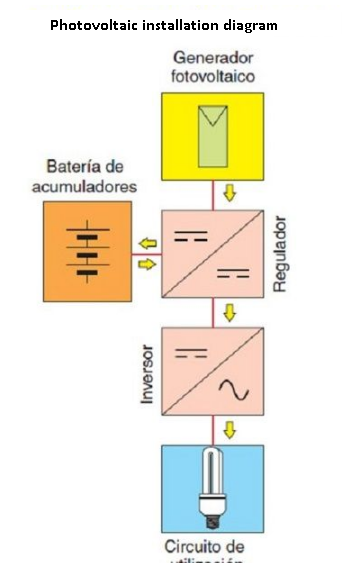 Be careful in real practice, the inverter connects to the batteries,  not to the regulator, as you can see in the following image: 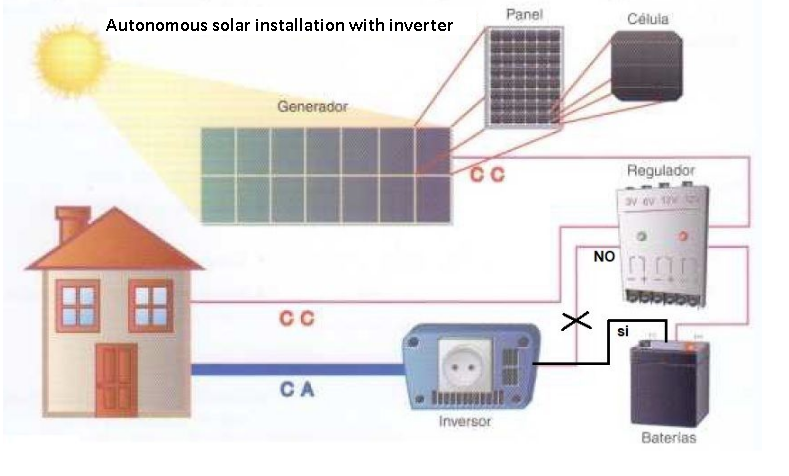 As a general rule (it is always done) the inverter is connected to the output of the batteries and not to the charge regulator since the inverter normally far exceeds the consumption intensity that the regulator could withstand. For this reason they are also called battery inverters.

As you can see in the figure,  a photovoltaic solar installation has the following components :

Components of a Photovoltaic Solar Installation

–  Photovoltaic Panels : they are responsible for  transforming the energy from sunlight into electricity .

The electrical energy generated by photovoltaic solar panels is in direct current.

On the one hand, it is in charge of  controlling the charging and discharging of the batteries  and, on the other hand, ensuring that the panels work at the maximum power point for the atmospheric conditions at all times.

This part of the installation, despite its low cost compared to the rest, is essential to protect the useful life of the batteries and the operation of the photovoltaic system. 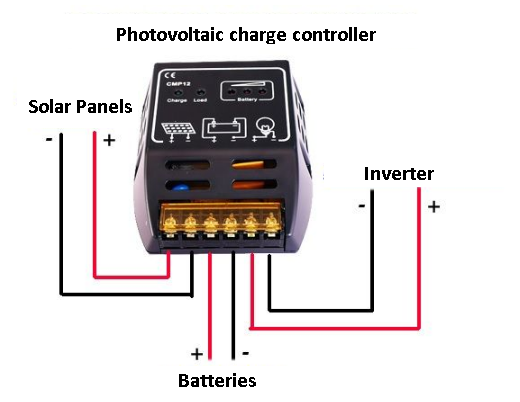 –  Inverter : if we want to connect the installation to the electrical grid, or we simply want to use it to power receivers in alternating current, we must have an inverter that  converts the direct current generated by the photovoltaic panels into alternating current that feeds the receivers .

It converts the voltage into direct current generated in the panels, into an alternating voltage of 230V of effective value and a frequency of 50Hz. Batteries : The production of solar energy and its consumption do not usually coincide in time, so it is necessary to use a battery system to  store the energy generated  in sunny moments and to be able to use it when the system or the installation does not produce enough energy that we need.

In the following image you can see the types of batteries most used in photovoltaic installations.

They are facilities connected to the electrical distribution network  to inject and sell the energy generated by the facility .

It is simpler than the previous one since it  only has panels, a grid inverter and an energy meter  to measure the energy sent to the grid.

Of course, it has more protection elements than the autonomous ones.

–  Generation block , made up of the photovoltaic panels, their connection boxes and the protections that are part of the generation system.

–  Wiring block , made up of the electrical conductors of the installation.

–  Conversion block , basically made up of network inverters and their protections.

The inverter must convert the direct current generated in the panels into alternating single-phase at 230V or three-phase at 400V and at a frequency of 50Hz.

You have to convert the current generated in the panels in DC to AC of the same characteristics as that of the electricity company to which the surplus is sold.

–  Control block , in charge of collecting the operating data of the installation and ensuring its correct operation.

–  Load block, or set of equipment or systems that will make use of the energy produced.

–  Block of auxiliary systems , formed by other generators from renewable energies, such as wind, giving rise to what is known as hybrid systems.