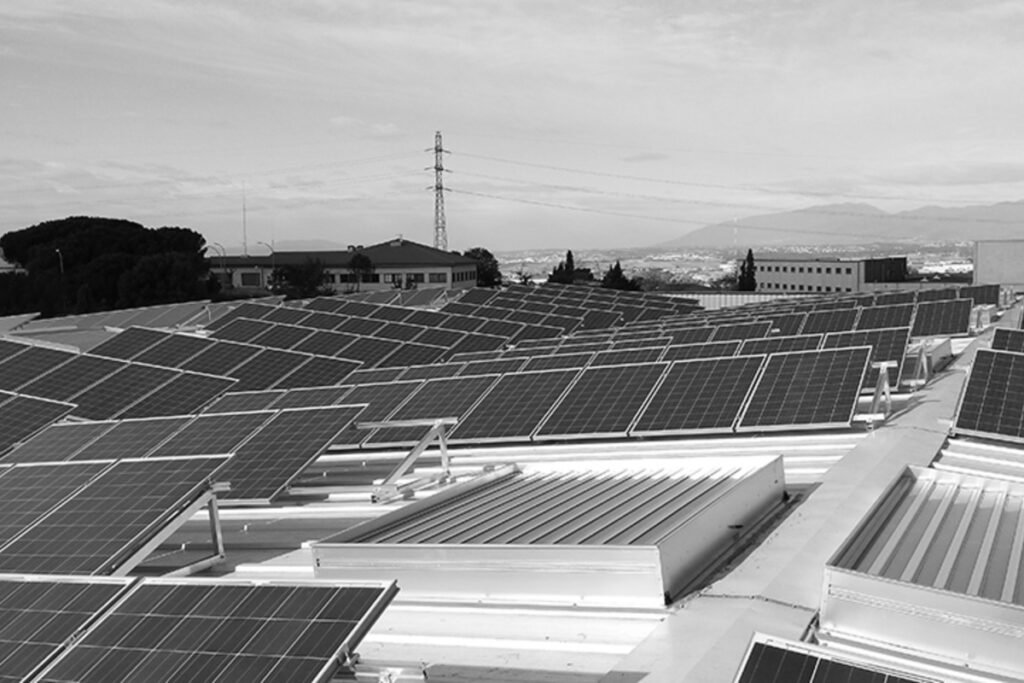 Climate change is a reality that is felt year after year with either the melting of polar ice caps or major world catastrophes such as earthquakes, tsunamis, floods ect.

Elmundo is becoming aware of this damage, which if measures are not taken to reverse this change may be late for future generations m

Photovoltaic solar energy, at the forefront in the face of climate change

All climate experts agree that one of the key actions to achieve this is the generalization of the use of renewable energy in general and of photovoltaic solar energy (hereinafter, ESF) in particular.

This energy source has aroused enormous interest in recent times for reasons beyond science. The recent Royal Decree on electricity consumption and the penalty for renewable energy by the current government of the Popular Party are, among others, some of the reasons that justify this interest.

In this article I will make a description of what are the scientific foundations of solar cells, pillars on which this source of energy is based, as well as some brief comments about the main technologies with which they are manufactured.

1. Fundamentals of solar cells
The conversion of solar energy into electrical energy is done using the properties of electronic devices known as solar cells. Basically, a solar cell is a device of moderate area (~ 250 cm²) that is manufactured with a class of materials called  semiconductors , which have been present in our daily lives for many years. Without them, devices such as computers, mobile phones, televisions and much more would not be possible.

Solar cells are usually constructed with silicon, since more than 90% of those on the market are manufactured with it. The rest of the market is made up of devices made with other semiconductors, mainly CdTe and CuInSe2. Photovoltaic panels built with these semiconductors are used to generate electricity in terrestrial applications.

In the field of space applications, the solar cells that integrate the batteries that supply energy to the satellites are manufactured with semiconductors composed of elements of columns III and V of the periodic table: GaAs, GaInP, AlInP, GaInAs, etc.

A basic silicon solar cell (those made with the other semiconductors are similar) is constructed by joining two zones of that material. During the manufacturing process, other chemical elements are intentionally incorporated into each of these areas, usually phosphorus on one side of the junction (called a negative electrode or n-Si) and boron on the other (the positive electrode or psi). The solar cell thus constructed is a diode and when illuminated with solar radiation the so-called photovoltaic effect is produced.

In essence it is that the energy of the incident solar radiation is absorbed by the solar cell, as a result of which electric charge carriers are generated in the semiconductor, which immediately results in the appearance of an electric current. Simultaneously, the flow of current through the cell causes a voltage to be generated between its ends.

As a result of the process, the cell produces an electrical voltage and current, which is what is needed to obtain electrical power (the electrical power is obtained as a product of both magnitudes) and energy by running it for a certain time (energy is the product of the power for the operating time). Therefore, the solar cell converts the radiation emitted by the sun and absorbed by it into electrical energy . The following figure shows the scheme and exterior appearance of a commercial silicon solar cell:

A solar cell produces little electrical power, between 2 and 3 watts (W), so it must be properly connected with others to make photovoltaic modules (between 30 and 50, depending on the type of module and the manufacturer) and thus obtain higher powers . A module, in optimal lighting conditions and depending on the size, supplies between 100 W and 250 W. In turn, the modules are integrated into panels, grouping these in the order of 10 to 30 modules.

The efficiency of converting solar energy into electrical energy of solar cells is nowadays in the range  10-25% , depending on the semiconductor used, its quality and manufacturing technology. The following figure details the efficiencies of the different types of solar cells that are manufactured today. It distinguishes between laboratory cells (usually small in size) and cells integrated in commercial modules, as well as the different technologies and semiconductor materials used: 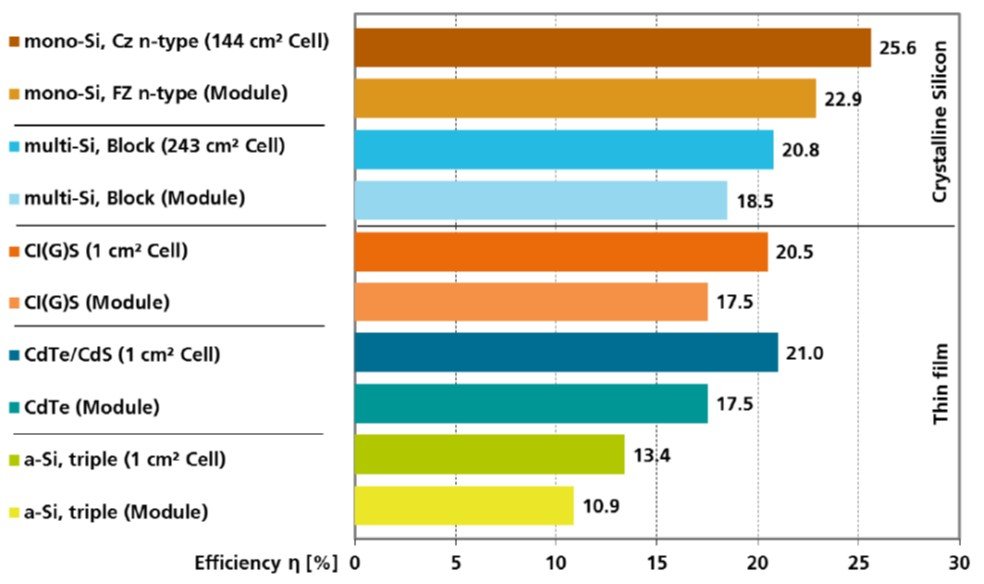 Efficiency of solar cells according to the technology and semiconductor used in its manufacture. The vast majority of commercial panels correspond to the mono-Si and multi-Si categories in the figure. Source:  Photovoltaic Report 2015 . Fraunhofer Institut ISE (Germany)

Due to both size and efficiency, if you want to use solar cells for the supply of electricity to a home equipped with all the usual appliances, it is necessary to use the order of 6-8 m² of solar panels per person (although this varies much according to geographic location).

On the other hand, if what is intended is to obtain electrical energy in amounts comparable to those produced by conventional thermal power plants, it is necessary to use hundreds of thousands of solar panels and therefore, millions of solar cells, hence those known as “Solar gardens” need to be installed using large areas of land, this being one of the main drawbacks of the large-scale use of the ESF.

2. Silicon solar cell manufacturing technology
At present, more than 90% of the photovoltaic market is dominated by silicon solar cells, distributed in similar proportions between the so-called mono-Si and multi-Si cells; the mono-Si is a high quality silicon and the multi-Si is a more defective material. The essential difference between solar cells manufactured with mono-Si and those made with multi-Si is that in this second case the solar cells are less efficient than those of mono-Si (see the second figure of the article), but more economical.

The process of obtaining, both mono-Si and multi-Si, is the most expensive step of those that make up the manufacture of a solar cell, both in economic and energy terms. Approximately 60% of the economic cost and 75% of the energy cost of a photovoltaic installation is invested in obtaining silicon. I describe some detail below:

To make solar cells, the first thing that is needed is to have purified silicon. Silicon is one of the most abundant elements in the earth’s crust, but it is found in it forming compounds, mainly oxides and silicates. These must be decomposed to obtain silicon, which must then be purified (must be 99.999999% pure) to serve as a starting material in the manufacture of solar cells. The decomposition of oxides and silicates and subsequent purification are very expensive processes from the energy point of view.

Once purified, the silicon undergoes a process of obtaining what are known as  wafers  (wafers) where the solar cell is manufactured. The process is known as  Czochralski , due to the Polish scientist (of unpronounceable surname)  Jan Czochralski , who developed it in 1916 while investigating the properties of certain metals.

The costs of solar cell manufacturing technology were for decades the main brake on the development of the ESF, but the economy of scale that has generated its wide use throughout the world has led to a drastic reduction of the same during the last decade .

Today, photovoltaic kWh is fully competitive compared to that obtained with fossil fuel based technologies . The progress of the ESF is unstoppable, as more and  more countries are  betting on renewable energy sources. The challenge of curbing climate change should boost its development in a general way across the planet .