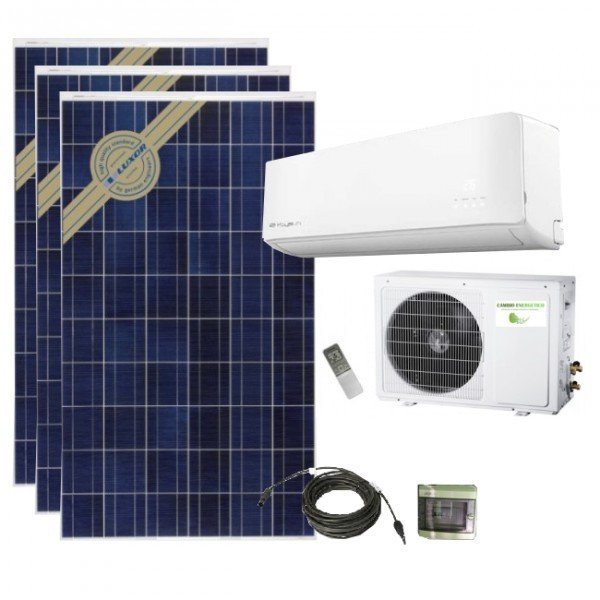 The temperatures increase year after year, the summers become unbearable in many countries and being able to keep the house cool demands a lot of money, an option to this high cost is the solar air conditioning

We have all seen an air conditioner, and we have surely had the pleasure of enjoying it on the beach, or in very hot cities. Unfortunately, your energy consumption is great, but did you know that solar air conditioning exists?

Let’s start by getting to know it in a general way. An air conditioner is a device that removes hot air inside a room or vehicle, thus reducing the air temperature.

Cooling is usually achieved through a refrigeration cycle. As well as the heat, it also removes moisture to achieve a more comfortable indoor environment, distributing it through the space in which it is located, improving the thermal comfort and air quality in the interior.

In short, air conditioning can refer to any device that modifies the air condition, either by heating it, cooling it, eliminating moisture, cleaning or ventilating.

How does the solar air conditioner work?

Inside the air conditioning, circulates a refrigerant whose function can be to reduce or maintain the temperature, below the temperature of the place. To achieve this, a cycle of four processes must be fulfilled, which is called the “refrigeration cycle”.

Expansion.- The refrigerant is in liquid state at high pressure. It is sent through an expansion element to achieve the cooling effect. This accomplishes two things: reduce the pressure and temperature of the liquid, leaving it in optimal conditions for operation.

Evaporation.- The liquid evaporates, yielding cold to the air of the place to be heated, driven by a fan. Now it is a gas.

Compression.- This gas returns to become liquid. First the gas must be compressed. This operation is carried out in the compressor, obtaining high pressure gas.

Condensation.- High pressure steam circulates through the condenser. The heat is evacuated to the outside and the refrigerant is again in liquid state. 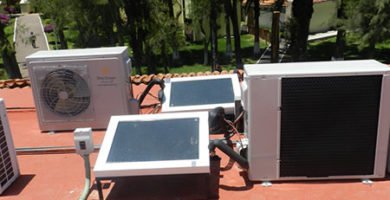 The so-called solar air conditioning uses  solar thermal energy  as an energy source to achieve cooling. Getting cold from the heat is a paradox, but it is possible thanks to the absorption cooling technique.

It is one of the applications with solar energy in which the supply is best adapted to the demand, since it is precisely when the heat is highest, when it is coldest we need to generate.

Solar installations  of this type require special equipment and installations in which there is more and more experience but which should have an important support both in the design and in the execution, commissioning and operation of the installation.

How do you get cold with heat? : Cooling by absorption

The operation of any absorption machine is based on three elementary physical phenomena:

1. When a fluid evaporates it absorbs heat and when it condenses it gives up heat.

3. There are established pairs of chemicals that have some affinity when it comes to dissolving one another.

Recalling the scheme of a conventional refrigeration cycle with a mechanical compressor, the liquid refrigerant fluid flows through the evaporator, the medium to be cooled yields heat by lowering its temperature, while the refrigerant evaporates. 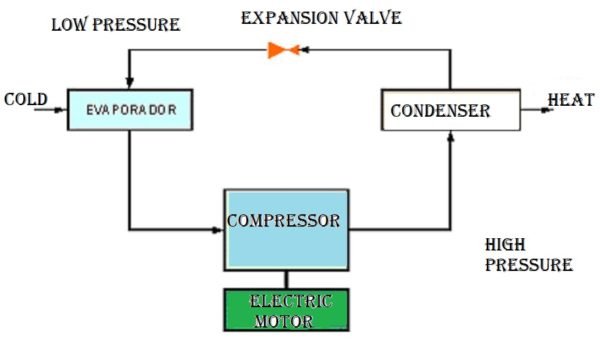 The low pressure steam passes to the compressor increasing its pressure and temperature to a point where the vapor liquefies yielding heat to the medium to be used in the condenser.

The coolant goes from the condenser to an expansion element in which its pressure and temperature are reduced to those of the evaporator, completing the cycle.

The refrigerant vapor released in the generator at higher pressure and temperature passes to the condenser. 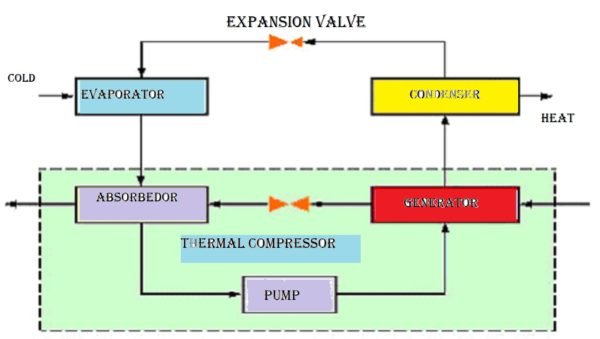 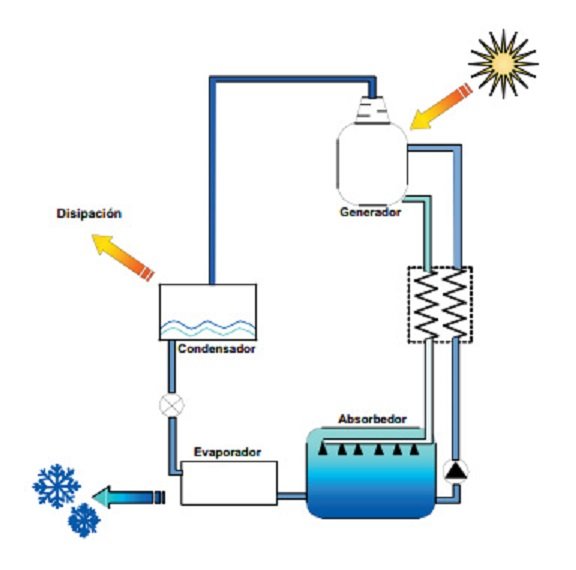 For this type of applications of refrigeration with absorption machines, normally machines of powers between 100 kW and 5,000 kW of cold or even greater are used, fed with steam or hot water generated with thermal energy coming from processes of heat recovery or directly from energy generated by combustion of fossil fuels or by direct flame. Some manufacturers have machines powered by hot water of lower powers, with a range between 35 and 100 kW.

Lately, as a result of the growing interest of feeding this type of machines through hot water generated by solar thermal energy, machines adapted or specifically designed to work with solar energy and with lower nominal powers (between 5 and 15 kW of cold) are appearing on the market. ) that expect to have an important and growing gap in the field of the application of solar thermal energy for refrigeration and especially in the residential sector.

Hybrids
A hybrid system combines photovoltaic technology with current from our homes. The system automatically switches between solar energy and the battery, as necessary. When the sun rises, the solar panel is responsible for recharging the battery of the system, when there is no sun, the battery is being charged through the power supply of the house. 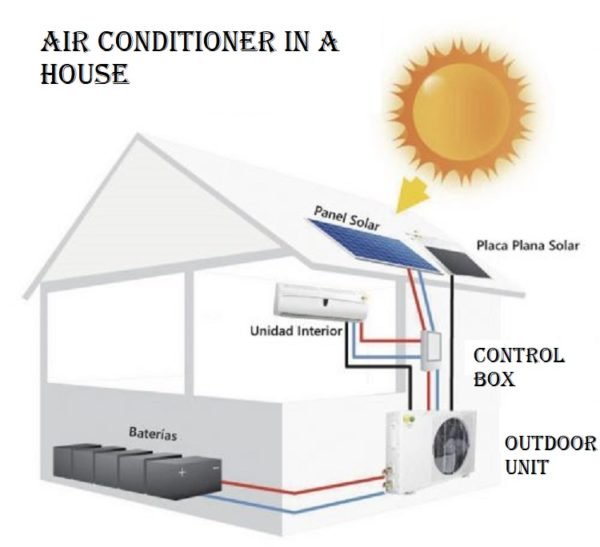 Disadvantages:
Only suitable in dry climates
Expenses to save 100% of energy
Does not provide heating

Absorption
Solar absorption systems use thermal energy to evaporate a cooling liquid to cool the air. The water heated by solar energy is used to start a dynamic process that low pressure that cools the water to about 7 ° C. The cooled water is taken to a series of copper tubes, so that the fresh air goes through the home. No electrical input is required. 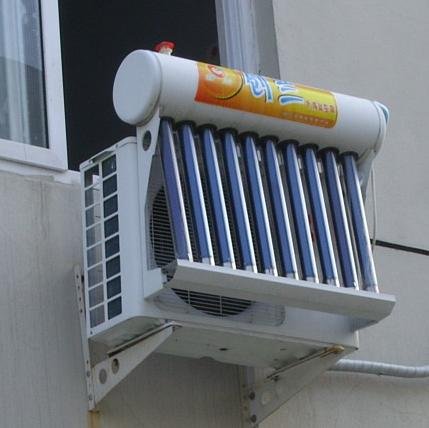 Disadvantages:
For the efficiency of the system, the water needs to be pre-heated.
Currently it is only available for large projects due to its cost.

Desiccants
Desiccant systems, air is dehumidified using a desiccant (can be silica gel, although other materials, mainly liquids have been tested) The air can then be cooled by evaporation of water. They typically incorporate heat exchangers and other components. 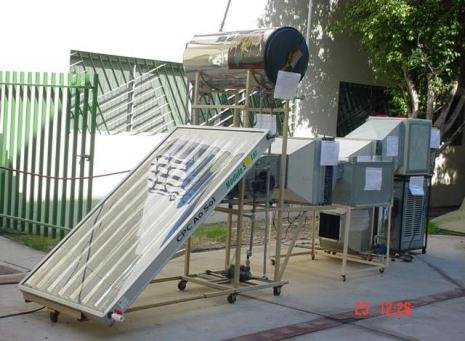 Disadvantages: They
continue to be expensive and are not easily found

The use of hot water and air conditioning in a home, are the most significant costs today, with the high costs for the use of electricity, the impact of the use of these technologies is a major concern for most people.

In the market there are many brands of Solar Air Conditioning, here are some:

Conventional air conditioners are used in the hottest hours of the day, contributing to a high demand on the electricity grid, which also translates into high costs. A solar air conditioner offers environmental benefits which include lower energy demand, reduced electricity costs, isolated system costs, and greenhouse gas emissions.

The use and knowledge of this type of air conditioning is growing and shows that we have it in the United States. The federal government allows owners and merchants, the deduction of 30% of the net cost of the system of their income taxes, which is available from this year.