First Solar and Suntech were the largest manufacturers of solar panels in 2011. Both companies produced 2 gigawatts of panels. The American company First Solar produces solar panels based on the extremely toxic cadmium telluride (CdTe). These panels are mainly used in very large free field installations.

The prices of the crystalline panels fell to an incredibly low level.

Large producers sold their panels at the end of 2011 at prices of around € 0.70 per watt peak, while smaller manufacturers used even lower prices to dispose of their stocks.

Manufacturers are fighting for life and death to survive in current market conditions.

The top 10 manufacturers together produced 12.5 GW of solar panels. That’s equivalent to 44% of world production in 2011. It is surprising that Sharp (Japan) and Hanwha (South Korea) are in the top 10.

As a result of the nuclear disaster in Fukushima, both countries are striving to generate a greater proportion of their electricity needs with solar energy.

This development is an important incentive for the photovoltaic industry. It is also worth mentioning the Japanese solar border (in which Shell has a part).

This company is one of the largest manufacturers of thin film panels based on the promising Copper Indium Selenide (CIS). Solar Frontier has definitely entered the top 25 in the second quarter of 2011.

In this list we provide the most reliable solar panel manufacturers on the market based on their manufacturing history, quality and real results. The history of the manufacturer and its reputation in the solar panel market will be an important factor to take into account when choosing a solar panel. 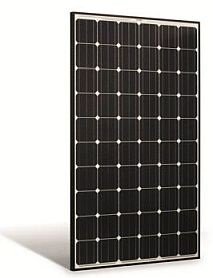 Initially we may be tempted to opt for the most efficient solar panel, however, if you have enough space on the roof, this is not always the best option:

Unfortunately, higher quality solar panels such as  LG or SunPower  cost  more than € 1 / Wp  and in most cases  this extra cost is not justified  by the increase in quality and the investment is not amortized.

This type of investment only makes sense where the space to install the solar panels is so small that it is necessary to maximize the production space with the minimum of solar panels, otherwise it will always be better and more profitable to use a more modest solar panel.

Another problem that solar panels manufacturers with superior quality are having such as  SolarWorld  (best German manufacturer of solar panels) is financial stability. Recently SolarWorld has entered into financial bankruptcy for the second time and its future is uncertain.

So even though their solar panels are of very high quality, if the company disappears, it will not be able to cover with the guarantee that it preaches. The professionals of the sector have already passed by, for example when Photowatt disappeared when manufacturing the best solar panel in the world …

On the other hand, we can find solar panels with lower efficiency, but excellent quality / price ratio. With production guarantees equal to those of the most expensive solar panels but at much more competitive prices. For example, solar panels  Jinko Solar  the largest manufacturer of solar panels worldwide,   whose prices are around € 0.5 / Wp.