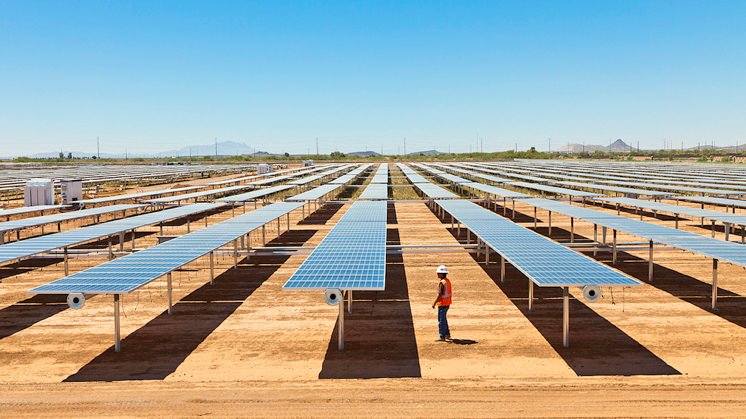 Photovoltaic solar energy is that obtained by transforming sunlight into electricity using a technology based on the photoelectric effect.

It is considered renewable, inexhaustible and non-polluting energy that can be produced in installations ranging from small generators for self-consumption to large photovoltaic plants.

Photovoltaic solar energy consists of the direct transformation of sunlight (photons) into electrical energy. This type of energy is often referred to directly as photovoltaic energy.

This transformation in electrical energy is achieved by taking advantage of the properties of semiconductor materials such as silicon through photovoltaic cells. The base material for the manufacture of photovoltaic panels is usually silicon.

When sunlight (photons) hits one of the faces of the solar cell, it generates an electric current. This electricity generation can be used as an energy source.

By means of very complicated processes, silicon ingots are made. Subsequently, these wafers (photovoltaic cells) will be cut from these silicon ingots.

Another source for obtaining  silicon  is the recycling of the electronics industry.

At present, other higher performance materials are being prepared.

It is important that all the cells that make up a  solar  photovoltaic panel have the same characteristics. After the manufacture of the  photovoltaic cells , it is necessary to follow a process of classification and selection.

Depending on the construction, the  photovoltaic modules  can produce  electricity  from a specific range of light frequencies, but in general it can not cover the entire solar range (in particular, ultraviolet, infrared and low or diffuse light). Therefore, much of the energy of the incident sunlight is not used by the  solar panels , which could give much higher efficiencies if it is illuminated with monochromatic light.

Therefore, another design concept is to divide the light into different wavelengths and direct the beams in different cells tuned to these ranges. This has been projected to be able to increase efficiency by 50%. Scientists from Spectrolab, a subsidiary of Boeing, reported the development of multi-union solar cells with an efficiency of more than 40%, a new world record for photovoltaic solar cells.

Spectrolab scientists also predict that concentrating solar cells could reach efficiencies of more than 45% or even 50% in the future, with theoretical efficiencies of around 58% in cells with more than three junctions.

Currently, the best rate of conversion of sunlight into photovoltaic energy in new commercial products achieves an  efficiency  of  the solar module  of around 21.5%. 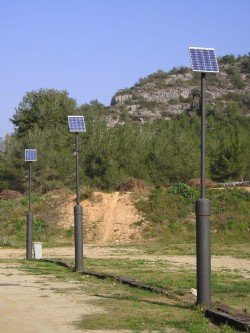 The main application of a photovoltaic solar energy installation is the production of  electrical energy  from  solar radiation .

Energy production can be large-scale for general or small-scale consumption for consumption in small dwellings, mountain shelters or isolated sites.

Within the applications of photovoltaic energy not connected to the grid we find in many areas of daily life. Photovoltaic energy is used in small devices such as calculators, as for street lighting in certain areas, to power electric motors and even cars and airplanes have been developed that work exclusively by taking advantage of  solar radiation  as an energy source.

The photovoltaic energy generated with the  photovoltaic effect  was recognized for the first time in 1839 by the French physicist Becquerel. However, it was not until 1883 that the first solar cell was built by Charles Fritts with an efficiency of 1%. During the first half of the 20th century there were several improvements to increase its  efficiency .

In 1946, Russel Ohl patented the modern union between semiconductor materials that is currently used. But the most important technological breakthrough came in 1954 when Bell Laboratories, experimenting with semiconductors, developed the first  photovoltaic cell  of  silicon , with a yield of 4.5%.

What are photovoltaic cells?

A  photovoltaic cell  is an electronic device that allows transforming the energy of light into  electricity  through the  photovoltaic effect . It can also be called  photocell  or  photoelectric cell .

Technically, what interests us about light is the  photons . The  photons  are present in all types of light but that we find most interesting is the one that comes from the  sun , the  solar radiation .

The type of electric current provided by a  photovoltaic panel  is  direct current .

Currently there are also new technologies in the production of  solar panels  that do not use  silicon , for example with cadmium telluride semiconductors, gallium arsenide and indium copper diseleniur.