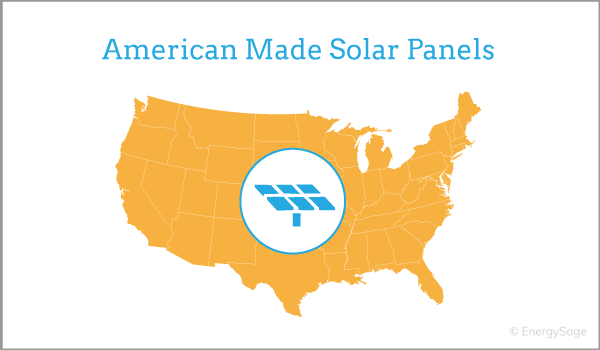 The solar energy industry in the UNITED STATES is developing more and more, each year that passes more American households add solar energy to their homes but  the solar panels in use  do not represent even 1% of the total energy consumed

SOLAR PANELS IN USA – A list of US-made solar panels

On January 22, 2018, the Trump Administration announced a 30 percent tariff on solar panels and cells imported into the United States.

This announcement raised many questions for solar customers. One of the most popular questions: where can I find solar panels that are made in the United States?

Solar panel manufacturers in the US (2022)

The following solar panel companies do some (or all) of their manufacturing in the United States.

There are two things we need to mention about our list of American-made solar panel companies.

First, many of these companies  assemble  their solar panels in the US, but import the key components from other countries.

These components also fall under the solar tariff, but there is an exception for the first 2.5 gigawatts (GW) of solar cells imported each year. (For context,

The United States installed 12 GW of solar power in all of 2017, of which an estimated 2.5 GW was US-made solar panels.)

Read on to learn more about the companies that manufacture solar panels in the United States.

What are the best companies that manufacture solar panels in the United States?

Here’s the breakdown of US solar companies:

Missing from the list above are Tesla and Panasonic, which began manufacturing American solar panels in late 2017. The two companies are producing Tesla’s new low-profile solar panel and solar roof product at its large manufacturing plant in Buffalo, known as Gigafactory.

WHERE ARE SOLAR PANELS MANUFACTURED, SHOULD YOU BE CONCERNED?

One of the things you may be wondering about while shopping for a solar system is where the solar panels are made. This article will help you determine if a panel’s country of manufacture should be a key consideration for you.

Does it matter where the solar panel companies are installed and where they make the panels?

When it comes to quality, the mention of any country name will evoke an association; each nation has its own brand image, which may or may not be justified.

However, as a savvy solar shopper, you’ll want to look at the facts to make a more informed decision. Our recommendation is to   judge each panel on its own merits.

The cost of solar power is falling across the country. Check prices in your area and get free quotes on the EnergySage Marketplace.

What if the country of manufacture is important to me?

This does not mean that the country of origin is never important, of course: everyone has their own preferences. For example, many Americans would prefer solar panels made in the US to those that are imported, either for patriotic reasons or because they trust the quality of the “made in America” ​​brand.

US Made Panel Costs

The highest quality and ‘premium’ US panels can even go as high as $1.00/W.

For a typical 6kW system, an additional cost of $0.30/W translates to about $1,800, a reasonable amount to pay if the ‘Made in America’ seal is important to you.

Also note that some states may offer rebates for locally manufactured panels that may offset some or all of the additional cost.

If ‘country branding’ is important to you, keep in mind that the location of a company’s headquarters is not always the same as its factories. (For example, SunPower is a premium American brand that has manufacturing plants in both the US and the Philippines.)

All things being equal, knowing that a company’s headquarters is relatively close or in a familiar country could help you make a decision.

Where do the major solar companies make their panels?

Below,  Solar Panel World   compiled a list of the top solar panel companies active in the US market based on the latest available information in 2018.

The table is broken down by each company’s market share, headquarters location, manufacturing facility locations, and overall quality ranking.

The key points from the table below are that:

1)  no country dominates the market  (although the United States and China do appear more frequently), and

.How many homes currently have solar power in the United States?

There are currently 1.3 million solar installations in the United States, with a cumulative capacity of more than 40 gigawatts. The Solar Energy Industries Association estimates that 1 megawatt of electricity can power  164 homes  , so 40 gigawatts is enough capacity to power 6,560,000  American homes.

Which state has the most solar energy?

California has more solar jobs and installed more megawatts of solar capacity last year than any other US state.

What percentage of solar energy is used in the United States?

Today, solar energy provides five-tenths of  1 percent  of the total energy consumed in the United States.

While the amount of utility-scale solar electricity capacity in the US has increased in recent years, from 334 megawatts in 1997 to 13,406 megawatts in 2015, it still only accounts for  0.6%  of net utility