Solar panels are gaining more and more popularity all over the world. This is not surprising, because solar installations allow an increasingly efficient production of clean electricity. In Poland, the dynamic increase in the number of photovoltaic installations began in early 2019, when the thermomodernization relief was introduced.

Since then, new programs have been emerging to support the development of photovoltaic energy in Poland and existing projects have also been improved. In this way, photovoltaic panels appear on an increasing number of Polish roofs, as well as on the ground. The following article aims to collect the most important information about photovoltaic solar installations. In this post you will learn the answers to the following questions:

Thanks to this, you will be able to learn more about this technology, its advantages, as well as useful advice that will help you choose the right installation for your needs. We invite you to read!

Solar panels, as their name indicates, work thanks to the sun’s rays that reach our planet, an energy equivalent to 1367 W / m2. This value is called the solar constant. However, slightly less energy reaches the surface because it has to go through the atmosphere. In Poland, of course, most of the solar energy comes in the summer months  (900 W/m2), thanks to which properly installed photovoltaic panels are capable of generating electricity practically all year round for a given household.

As already mentioned,  solar panels generate electricity from solar energy  . How is this possible, though? We owe everything to the so-called photovoltaic phenomenon, which was  observed in the first half of the 19th century by the French physicist Alexandre Edmond Becquerel  . During his research, he noticed that the irradiation of two electrodes made of the same material causes a voltage to arise between them. However, it was only after more than 100 years that a solar cell was manufactured, which was made of silicon (that is, as we know it today), it was in 1954, since then,  photovoltaics began to develop dynamically.

The photovoltaic phenomenon was scientifically explained in 1905 by Albert Einstein  . He created a theory about the wave-particle nature of sunlight. This means that the sun’s rays must be treated as waves propagating in space with a certain frequency and as a stream of photons (quanta). It should be known that each quantum carries energy that is transferred to the electrons during their collision  . If the transported energy is large enough, photoemission occurs, that is, electrons are removed from atomic orbits. Atoms that have lost an electron have a positive charge (+e), and the place where the electron is missing is called a hole(s). 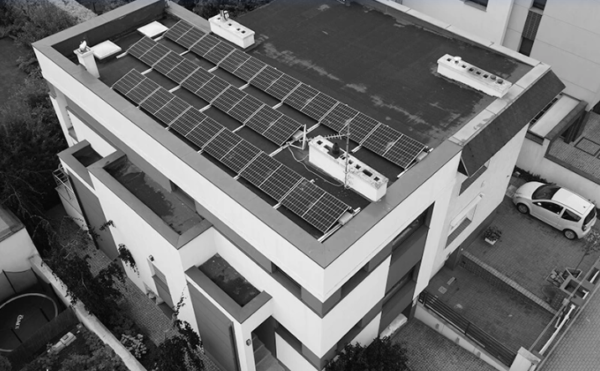 Photovoltaic panels are interconnected solar cells,  usually made of silicon  . Why this material? Because silicon is an element that has four valence electrons in its last shell. Such a structure allows a relatively fast photoemission and therefore the appropriate generation of electricity. Due to the relatively low conductivity of silicon,  photovoltaic panels are made from modified silicon  , which is enriched with other elements.

A single photovoltaic cell is made up of a semiconductor type “n” (negative) and type “p” (positive). As already mentioned, they are enriched with various elements, so  their potential difference is much higher than in the case of ordinary silicon  . With the additional energy of the photons, this difference becomes even greater and a current begins to flow through them. Photovoltaic panels consist of photovoltaic cells that are connected in series and in parallel  . In this way, a single panel can generate electricity up to 400W.

Due to the production method, photovoltaic panels are divided into several types. The oldest and at the same time most popular solar panels are those with  first generation cells  , that is, thick layers.

They are divided into two types: monocrystalline and polycrystalline. As their name suggests,  monocrystalline cells are made from one crystal of silicon  , making them highly efficient (due to the ordered structure). The production method of such photovoltaic panels consumes more time and energy, making them the most expensive option. Remember, however, that your choice brings many advantages:   the highest efficiency and the longest service life  (such solar panels work without problems for more than 25 years). Polycrystalline cells are cheaper.However, its construction makes the efficiency slightly lower than in the case of monocrystalline cells. Its efficiency fluctuates in the range of 15-18%. Polycrystalline photovoltaic panels have a characteristic blue color and visible silicon crystals (similar to frost).

The least popular, but constantly improving, photovoltaic panels are those made from second and third generation cells. Second generation cells are also known as thin film cells  and can be extremely flexible. They are increasingly used as construction elements. Cells of the third generation, on the other hand, are completely different from the rest.  . At the moment, they are characterized by very low efficiency and short lifespan, but research on this type of cell is still ongoing. In the future, they could be another great advance in the field of photovoltaics, since the cost of their production is extremely low.

Solar panels and the rest of the installation

If we already know what photovoltaic panels are available on the market, it is time to start building the complete installation. Its most important components, in addition to the solar panels, are:

Photovoltaic installations can be on-grid or  off  –  grid. It all depends on whether we are connected to the network or have a battery in which we store the generated energy. It’s worth noting that  grid installations are much more popular  , because we don’t have to buy expensive batteries, and we can send excess power back to the grid and collect it when our solar panels don’t produce the right amount of electricity (e.g. in the afternoon). or in winter). Off-grid installation will be perfect for a location that is off-grid and used seasonally(for example, a summer house). In this way, we will give ourselves access to electricity without having to buy a generator powered by the constant increase in fuel prices.

Solar panels in Poland: is it worth it?

Many people who are just learning about photovoltaic technology believe that photovoltaic panels are not a very profitable option in our country. Nothing could be more wrong! Thanks to numerous subsidies and concessions, we can significantly reduce the cost of investment and enjoy free electricity even faster  . The return on investment with the use of basic subsidies and concessions can be shortened to 6 years! It is also worth paying attention to the fact that the discount system allows prosumers to return surplus energy and collect a significant part of it at the time of shortage. The best confirmation of the profitability of investments in photovoltaics is the fact that Photovoltaic panels are appearing on an increasing number of Polish roofs  .

Co-financing and discounts for solar panels

We have already mentioned several times about projects that  support the development of photovoltaics in Poland. Here are the top shows that are relentlessly popular.

The co-financing for photovoltaics came into force in September 2019 and allows you to  obtain PLN 5,000 of financing for a photovoltaic installation  . The My Electricity program is extremely popular: after one year, approximately 68,000 subsidies were paid, amounting to more than PLN 340 million.

The return on investments in solar panels can also be increased by using the Clean Air program, whose new improved version came into force in May 2020.  Principles of the Clean Air 2.0 program. resulted in a shorter application processing time, the application  itself is much simpler and can be done online.

Are photovoltaic panels profitable in Poland?
Of course! It really all depends on the design and the components used for the entire photovoltaic installation. As we showed in our previous article, the amount of sunshine in Poland is enough for solar panels to generate the right amount of electricity.

Roof or ground solar farm?
There is no single answer to this question. Solar panels for the home are usually solar panels on the roof, because thanks to this we can use the unused space. If the roof structure is not conducive to photovoltaics, we can easily opt for photovoltaic panels on the ground.

The power of solar panels is also the subject of one of our blog posts. There, you will learn more about which PV will be right for your building.

How long do solar panels work?
The useful life of photovoltaic panels is very long and usually exceeds 25 years. However, solar panels are gradually losing their efficiency (on average 0.5% per year): after 25 years, the panels will be operating at 87.5% efficiency. Most photovoltaic panel manufacturers cover their products with an energy guarantee; typically for standard panels this means that over 10 years their efficiency can drop by a maximum of 10%, and after 25 years by 20%.

Is it possible to expand the installation with more solar panels?
The expansion of a photovoltaic installation is possible! If it turns out that after a few years our demand for electricity has increased significantly, we can easily connect new photovoltaic panels. Remember, however, that it is best to use the services of professionals, thanks to whom we will be sure that the entire installation has been optimally designed and its components will be selected appropriately for our needs.

We hope that you already know how photovoltaic panels work and have learned how to increase their profitability with the right financing. If you are interested in having your own photovoltaic installation, contact us to specify the details!