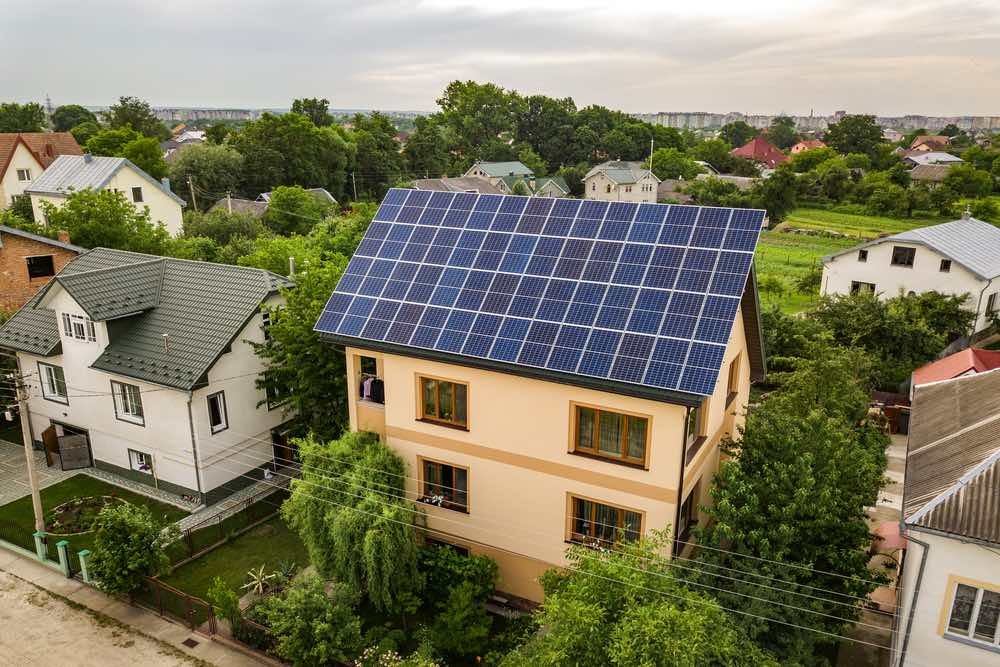 Solar panels have become very popular in recent years among environmental enthusiasts and people who want to go green. In this article we will talk about Solar panels on roofs,  the installation of solar panels on roofs is the most common practice although there are times that they are installed on land.

All about rooftop solar panels: how they work, benefits, installations and alternatives.

Solar panels on roofs: what are they and how do they work?

A solar panel is the set of solar panels, or photovoltaic modules, that generate energy by direct conversion of sunlight.

Each of these panels is made up of dozens of  photovoltaic cells . These cells generate power directly by converting sunlight.

To get power from a solar panel, you just have to put it under sunlight.

To power your house with  solar energy , it is not enough to have a solar panel, you will also need other equipment.

In a solar energy kit we find:

The set installed and in operation is called  a photovoltaic system .

As it generates energy with sunlight, the rooftop solar panel will not produce energy at night, and it will produce less power on rainy or cloudy days, generally on less bright days.

We have two alternatives to solve this problem:

Most of the systems that are installed are of the network type, due to their lower cost and simpler maintenance.

System connected to the network (On-Grid)

An “On-Grid” photovoltaic system works connected to the commercial electrical network. All the energy generated during the day by the panel and that is not consumed immediately is fed into the public network. The investor is responsible for this task.

During the night or at times of low production of the system, the energy of the commercial electrical network is used.

Solar panel on the roof: 7 advantages

Among all the renewable energy sources allowed for distributed generation, solar is the most widespread throughout the world.

In addition to being the most used, photovoltaic systems also offer several advantages that make them the best option.

Even exposed to the elements on the roof, a solar panel has a standard lifespan of at least 25 years.

The loss of efficiency in the conversion of light into energy is minimal and the main manufacturers guarantee 80% of the generation at the end of this period. A module, up to 25 years of life, will generate at least 80% of the amount of energy that it generated at the beginning.

The  photovoltaic inverter , which is the other fundamental part of the system, has a minimum useful life of 15 years. With proper maintenance it can last a little longer.

Even though the system works for many hours every day, photovoltaic systems need very little maintenance.

The main one, which you can do yourself, is cleaning the plates.

But this is only in case they are very dirty, since they have a non-stick film that prevents the accumulation of dirt. In the case of dust, rainwater is responsible for taking it away.

In case of excessive dirt or bird droppings, cleaning is simple and only requires a jet of water and a soft bristle broom.

We will also have to maintain the electrical system, but much less frequently. Once a year is enough to ensure the optimization of the system generation.

These systems are manufactured with the necessary protection against physical damage. Photovoltaic panels are resistant, they can even withstand the impact of large balls of hail. Everything to ensure that they work during their long life.

Another big plus for home solar installers is the value it adds to your home.

A home that generates its own power should be worth more than one that doesn’t.

Therefore, if you decide to rent or sell your house after installing a photovoltaic system, you will be able to sell it at a higher price.

Having a photovoltaic system in your home ensures that you do not have shocks on the electricity bill.

With a photovoltaic system, you will be protected against increases in rates.

Installing a solar energy system is an investment. And the payback period for investing in solar energy is very attractive.

Although it will depend on the cost of your installation and the price of electricity where you live, I can assure you that you will amortize the investment before reaching the end of the useful life of the plates on your roof, so you will enjoy a few years of free electricity.

And, of course, this return on investment is only possible thanks to the greatest advantage of these systems: savings that can reach up to 95% on the electricity bill.

A photovoltaic system connected to the network (On-Grid) can be designed to generate all the energy consumed in a house. Thus, you stop paying for the energy you have used from the network and you will only have to pay the minimum fee.

In the early days of solar PV, between the 1950s and 1970s, off-grid PV systems were the only type that existed because the goal was to bring electricity to places where distribution networks did not reach.

The great examples of the use of off-grid photovoltaic systems are the artificial satellites (telecommunications, meteorological…) that orbit our planet, and all of them are electrically powered by solar panels, which are one of the components of the photovoltaic system implemented in the world. satelite.

Photovoltaic solar panels were used mainly in telecommunications. One of the first documented uses of solar panels was to power a “rural telephone” installed in the American city of Americus, Georgia, in 1955.

The concept of on-grid and off-grid PV emerged only after the use of inverter technology to directly connect PV solar panels to the grid, without the power going through a battery bank; which would eliminate one of the most expensive (and least durable) components of an isolated PV system (off-grid PV system), which is the battery.

It was then that the use of photovoltaic solar energy took a qualitative leap, and since the end of the 90s, mainly with subsidies, the mass production of the main components (modules, inverters, charge controllers, batteries) began, followed by new techniques and components for the integration of photovoltaic systems.

Components of an Off-Grid system

These systems are ideal for houses that want to live autonomously, generating and consuming their own electricity, or for isolated houses that do not have the possibility of connecting to the commercial electricity network.