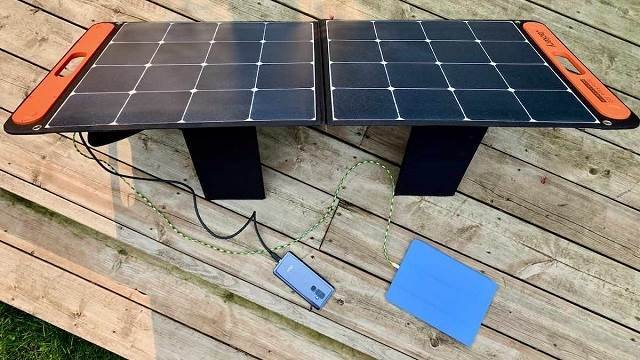 There is a wide variety of solar panels , of which it is important to know if you want to install them in your home. Solar panels are undoubtedly the best source of renewable energy today.

In fact, thousands of people around the world have been adding to the installation of these for their daily uses. In order to not only have better economic profitability, but also help in environmental stability.

That is why here we will tell you everything you need to know about the different types of solar panels that exist today.

Explaining what solar energy is about is really something that is said to be easily understood , but not many people really understand it correctly. This energy model is now being pushed with greater force today.

Solar panels work when the sun’s rays hit them , they are made with materials that are semiconductors and transform the energy received into electricity. These are transformed into solar cells, they are small cells made of crystalline silicon or they can also be made up of other types of materials.

Types of solar panels according to the faces that take sunlight

In this you find a first distinction between the respective solar panels which have one or two faces that take and transform sunlight. It is normal that the first thing that comes to mind when imagining a solar panel is the monofacial model.

These monofacials are the ones that take the light but only on their upper face, the lower face being only dark. But one thing you need to know is that there are also solar panels that are bifacial.

Technology has undoubtedly advanced exponentially, and these years there has been a boost in the technology of these panels. In fact, these have two faces capable of taking and storing sunlight, converting it into electricity.

Types of solar panels according to the technology they possess

Another way to differentiate solar panels is according to the technology with which they carry out their work. Among these we will be able to find the following panels:

These are the panels that people use the most today, since their installation is very simple and can be placed on any roof. One of these reasons why many people prefer it is because they have a very aesthetic appearance.

In monocrystalline solar panels, the cells are black , which gives them a good aesthetic touch. If you don’t know how to identify them, you should only look at the shape of the silicon wafers, these are easily found in squares but with the corners cut off.

These types of solar panels can also be called multicrystalline , and they are quite popular. If you are a homeowner on a budget, these will certainly be perfect for you.

Commonly, these types of solar panels are made from polycrystalline silicon cells, on the other hand, these will not have the corners cut off. With this solar panel you won’t be able to see the blank spaces on the front that you see on monocrystalline panels.

The way in which this type of panels is created makes them have a characteristic irregular blue color , which some people do not like. The manufacturing process also makes them slightly less efficient than the others.

Thin-film panels are completely different than the two types of panels mentioned above. They are a dull black color , they do not have common outlines of silicon cells.

In fact, these thin film solar panels are one of the lightest and most flexible , making them perfect for installation. The cells that are used in this are large-scale, that is, this is the one that is most used in industrial processes or public services.

This is because you have fairly low efficiency ratings, forcing you to need a larger amount of space to install the modules . These can be used in domestic places too without any problem.

The real differences between monocrystalline, polycrystalline and thin film panels.

Presented the types of solar panels according to their technology , let us now see a little more in detail, what differences we have the possibility of discovering between one and the other, in which it refers to the construction process and the efficiency that they have.

What differences could we find in the manufacture of solar panels?

These get their name from the way they are made, all particular solar cells have a silicon wafer that is developed from a single crystal of silicon. The single crystal is formed by the Czochralski procedure, which includes the following steps:

We can say that a monocrystalline panel will always have between 60 to 72 cells , but this always depends on the size of the panel. The largest part of residential installations use 60-cell monocrystalline silicon panels.

Cells in polycrystalline are created in much the same way as monocrystalline. However, instead of subtracting the silicon seed crystal , the entire silicon pot is cooled, as above can also be found with 60 to 70 cells

Solar panels that are thin tend to always make a photovoltaic substance on a solid area, such as glass.

All of these materials create a different “type” of solar panel, however, they all fall under the umbrella of being skinny-ribbon solar cells. Due to the construction process, solar panels end up being light and sometimes flexible.

However, it also makes them less efficient than crystalline solar panels.

What kind of solar panels can be considered the best?

Since monocrystalline solar cells remain made of a single crystal of silicon , electrons are able to flow more easily through the cell. Which causes the efficiency of the photovoltaic cell to be greater than that of other types of solar panels.

The higher efficiency of monocrystalline solar panels means that they need less space to achieve a defined power capacity. Consequently, they are primarily going to have a higher power output than polycrystalline or skinny ribbon modules.

This makes monocrystalline solar panels ideal for people with limited roof space, so keep that in mind.

With this type of solar panels there are various silicon crystals which allow the correct flow of elections. This crystalline composition causes the efficiency rate to be lower than that of monocrystalline panels.

By the way, at high temperatures their efficiency decreases; that is, they decrease their production. In such cases, a polycrystalline panel will perform better than a monocrystalline panel.

Thin-film technology, on the other hand, is reputed to be the worst of the solar panel technologies as it has the lowest efficiency . Until fairly recently, skinny tape efficiencies were in the single digits.

Scholars have recently achieved an efficiency of 23.4% with prototype thin-film cells. What should be known is that these thin panels are the most accessible commercially since they have an efficiency in the range of 10-13%.

The low efficiency rating means that you will need to install more thin-film solar panels to generate the same amount of electricity as a monocrystalline or polycrystalline solar panel. Hence, this class of panels does not really make much sense for residential installations, where space is limited.

The thin panels also have a shorter effective life than other types of solar panels. Since they degrade much faster, you may need to replace them more often.