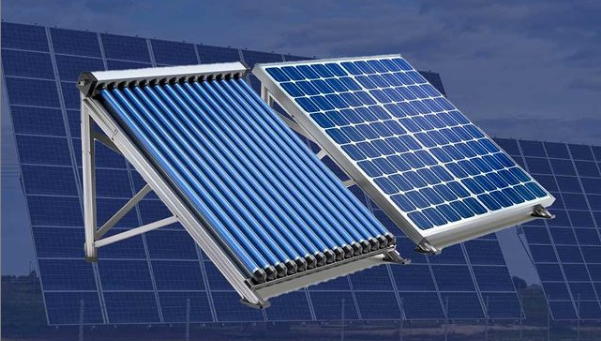 Although photovoltaic panels have already appeared on Polish roofs forever, they are still often mistaken for solar collectors. However, the difference between these facilities is fundamental.

Solar panels produce electricity from the sun, while collectors only serve to convert solar energy into thermal energy. How do both systems work and which one is more beneficial?

Solar panels and collectors: what connects them?

Both the photovoltaic panels and the collectors can be placed on the roof or in independent structures. At first glance, they look similar and can therefore be confused. The two systems are also linked by the fact that they use solar energy. In practice, however, these are not competitive solutions, but they can complement each other.

Solar collectors: how do they work?

The sun’s rays that fall on the absorbent are transferred to the factor, which is generally composed of glycol and water. This solution transfers heat to the reservoir in the form of warm water. How collectors work is closely related to the side of the world they face. South-facing facilities are the most efficient. Note that solar collectors only work when the sun is shining, so they have a lot of heat loss in cold climates.

Taking into account that in our climatic zone the sunniest months are from April to the end of September, this is when the collectors work better, even allowing for the renouncement of other sources of domestic hot water heating. In winter, the collectors support conventional heating sources to a very small extent. Before deciding on pickers, you should consider whether, given the changing weather conditions that affect your work, installing pickers will be profitable.

If the collectors do not emit heat to the liquid in the tank for a long time, a failure may occur in case of high insolation. This process is called stagnation. In the case of collectors, leaks can also occur. This type of failure does not occur with solar panels.

Due to their construction, solar collectors are divided into
flat collectors and  vacuum collectors  . What are the differences between them?

The element that absorbs sunlight is in the shape of a metal plate. In the lower part there are tubes in contact with the plate, through which the solar fluid flows that heats the water in the domestic hot water tank. From the top, the absorber is fixed with a strong glass sheet. Everything is encased in a mineral wool insulated casing.

In vacuum collectors, the absorber is divided into parts, each of which is placed in a glass vacuum tube, which provides good thermal insulation. The pipes are connected by a collector bar through which the working fluid passes, which collects the heat and transfers it to the domestic hot water tank.

Thanks to their physical properties, the sun’s rays that fall on silicon photovoltaic panels convert them into free electricity. The electricity obtained in this way can be used by all devices in the house or utility building. For a photovoltaic installation to produce electricity, it must be bright.

Despite the many myths that exist,  photovoltaic solar energy  also works  in winter  . We do not need strong solar radiation to start the installation; there is less electricity from the sun than in summer, but the solar panels still work. The amount of energy obtained depends, among other things. on the power of the entire installation, the angle of inclination of the panels and the intensity of radiation.

Solar panels: the most popular types

The Polish market is dominated by the two most popular types of photovoltaic panels: polycrystalline and monocrystalline panels. The installations made with them can be observed in houses, farms, companies, public buildings and even in large photovoltaic farms. How are “blue” solar panels different from “black” ones?

Constructed of polycrystalline silicon which is made of many single crystals of silicon. They are usually light blue in color, with visible glass edges on their surface. Links are square. Compared to single crystals, these types of modules are less efficient and less resistant to high temperatures, but they are cheaper.

They are made of large single crystals of silicon, they are characterized by a dark color, from dark blue to black. Photovoltaic cells  are created by slicing cylindrical silicon crystals, giving them a characteristic square shape with cut corners. They are characterized by their high efficiency and durability. Due to their dark and elegant color, they are most often chosen by homeowners.

Solar panels: the most popular technologies

Photovoltaics  is not a new technology because it has been in development for several decades. The increasing popularity of this method of obtaining electricity has caused manufacturers to constantly refine the design of the modules. Today, the panels produced have high efficiency and durability. The best manufacturers in the world declare a high efficiency of their modules even after 30 years (eg Sunport – efficiency guarantee at the level of 82% after 30 years). These are the most popular technologies that contribute to the high parameters of the most modern photovoltaic panels:

Technology
PERC (passivated emitter and rear cell) in Polish known as technology with the lowest passivating the emitter. The photovoltaic panels of this technology have a higher efficiency by increasing the absorption efficiency of solar radiation. Solar radiation of different wavelengths passing through the cell is reflected from the back reflection layer and back into the cell. In this way, the radiation lost in standard technologies becomes an additional source of electrical energy when cells with underpassivation are used.

Half-cut panels, that is, with cells cut in half, have 120 photovoltaic cells instead of the classic 60 cells. The area of ​​the half-cut cells is smaller, thanks to which they generate a correspondingly lower current and twice less electrical resistance. One of the biggest benefits of photovoltaic panels made with this technology is that they are less prone to power reduction due to shading. In a partial shading situation along the short edge of the module, it loses only half its power. In a standard 60-cell module, the power drops to zero in this case.

Photovoltaic panels manufactured in MWT (  Metal Wrap Through) technology  are an alternative to standard modules with busbars. Instead of running along vertical stripes, MWT panels have collecting electrodes placed on the bottom layer of the module (back contact circuit). Thanks to the elimination of the busbars, the shading area of ​​the module is 3% smaller, thanks to which the solar radiation is used to the maximum. Modules made with this technology mean higher efficiency and good electrical parameters. MWT panels are even more environmentally friendly because, unlike standard modules, they do not contain lead.

Solar panels do not need maintenance. The panels are controlled remotely thanks to an inverter connected to the wi-fi network. It is not necessary to control the installation manually. It is similar with cleaning, the panels placed at right angles are cleaned, for example, from snow in winter, which by gravity slides on its own. Solar panels have no moving parts, making them virtually fault-free. The facility is maintenance-free, eliminating the cost of maintenance and inspection.

Solar panels or collectors: what brings the greatest benefits?

As you can see, both the collectors and the photovoltaic panels work thanks to the sun’s rays. Both installations are mounted on the ceiling.
What makes them different is the fact that collectors are used only to heat water, while photovoltaic panels generate electricity. We use this current to power all electrical equipment in the house, including, for example, heat pumps.

A   properly designed and installed photovoltaic installation  will cover energy demand throughout the year. We store the electricity not currently used in the plant, thanks to which we can take advantage of the surplus produced in summer or during the day, collecting 80% / 70% of the energy, for example, at night or in winter, when the days are shorter and so on. much radiation does not reach the dark sunny ground. Furthermore, solar panels have a long service life and are highly effective even after 30 years. Comparing both technologies, it can be concluded that solar panels are more universal and, therefore, more profitable.