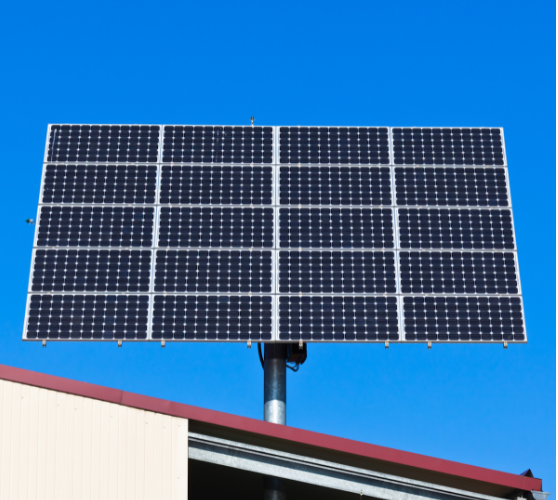 There are many ways to design and install a solar self-consumption system. If you are considering a ground-mounted solar panel installation, you might consider a solar tracking system so that your panels follow the sun. This article will examine what it means to install a solar tracker and whether a tracking system is suitable for your solar project.

What to know about Solar trackers.

Solar trackers help maximize solar production by tracking the sun throughout the day.

Solar trackers are often used in commercial installations or other large ground-mounted systems.

What are solar trackers?

A solar tracking system maximizes the electricity production of your solar system by moving the panels to follow the sun throughout the day, optimizing the angle at which the panels receive solar radiation. Solar trackers are typically used for ground mounted solar panels and large standalone solar installations. They are not typically used in most residential solar projects , but have a place in the commercial and industrial solar market.

When solar panels are exposed to sunlight, the angle at which the sun’s rays meet the surface of the solar panel (known as the ” angle of incidence “) determines the ability of the panel to convert the incident light into electricity. The narrower the angle of incidence, the more energy a photovoltaic panel can produce.

Solar trackers help minimize this angle by orienting the panels so that light falls on them perpendicular to their surface.

There are two types of solar tracking systems, one-axis and two-axis.

A single axis tracker moves the panels on an axis of motion , usually aligned with north and south. These movements allow the panels to arch from east to west and follow the sun as it rises and sets.

A dual axis tracker allows the panels to move in two axes , aligned north to south and east to west. This type of system is designed to maximize the capture of solar energy throughout the year. It can track seasonal variations in the sun’s height, in addition to normal daily movement.

Dual axis trackers are generally a much less popular option for solar installations, even among large-scale projects.

In addition to the difference between one-axis trackers and two-axis trackers, there are also active and passive solar trackers.

Passive solar trackers also follow the sun, but without any added power source. They move using the heat of the sun to heat a gas. When that gas expands, it causes a mechanical movement of the solar panels. When the sun moves and the gas cools, it compresses again and the panels move again.

The key is that active solar trackers use a motor to move and passive ones use the sun to move.

In general, active solar trackers are more suitable for large and complex installations, while passive ones can be used for simple photovoltaic systems and not much else, given their lower precision.

Advantages and disadvantages of solar trackers.

The biggest benefit of a solar tracking system is that it offers increased electricity production .

Typically, a solar panel system with a single axis solar tracker installed achieves a performance gain of 25 to 35%. A two-axis tracker increases performance by 5-10% more.

If you live in a high latitude where the position of the sun in the sky varies dramatically between the summer and winter months, a dual-axis tracking system can be a good way to maximize your solar production and generate enough power for your home or house. property.

However, there are some downsides to having a solar tracking system. They tend to have higher installation and maintenance costs .

Another disadvantage of solar trackers is that they are often too heavy to be used in rooftop solar projects . If you want a solar panel system with tracking functions, be prepared to install it on the ground.

A rooftop photovoltaic installation offers lower costs and does not require a dedicated space in the garden or on your property, making it the preferred option for most homeowners interested in solar energy.

For this reason, most solar home systems do not include solar trackers. If you have a south-facing roof, your solar panels will already be well oriented to capture maximum sunlight, reducing the need for a tracking system.

Solar trackers will give us value in places of high latitude due to the annual movements of the sun. For this reason. However, for most installations, the movement of the sun will not affect the production of your panels to the extent that a tracking system offers significant economic benefits. Most of us are better off installing a roof assembly on a south facing surface, or a fixed system mounted on the ground facing south.

Solar tracking systems are also often used on large commercial projects, typically over 1 megawatt (MW). For commercial-scale solar installations, the long-term benefit of increased production is enough to make the initial cost and maintenance costs worth it. Additionally, commercial-scale solar projects are often ground-mounted, so solar trackers are a possibility to consider.