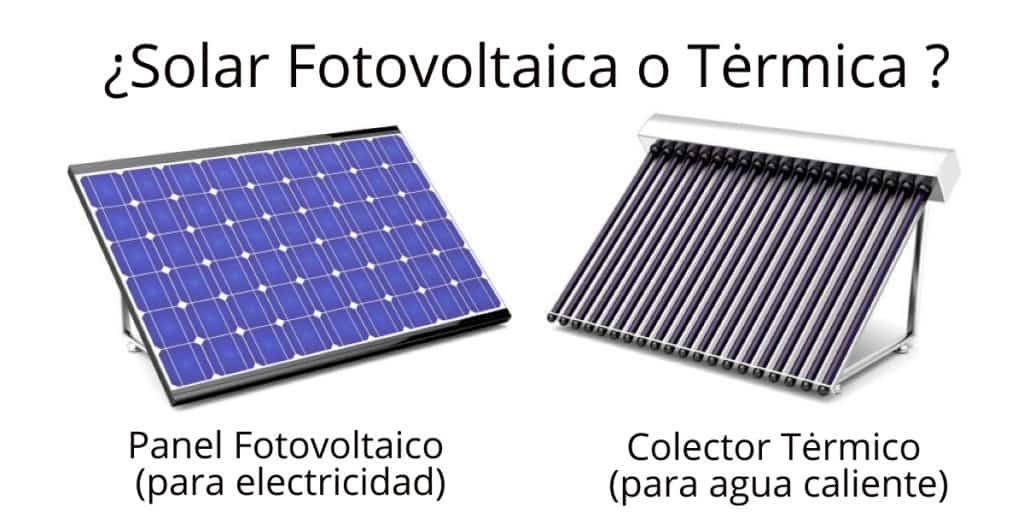 Today, in the midst of a global energy transition, it is very common to put solar panels on the roof of a house. Perhaps you are one of those people who is thinking of using solar energy in your home to save on electricity consumption and, perhaps, you are wondering what is the difference between thermal solar energy and photovoltaic energy? Or, is it not the same a thermal collector than a photovoltaic panel?.

We are going to try, in this article, to summarize what solar thermal energy consists of and its most common applications. It is an article that complements those that we have discussed on photovoltaic solar energy and also the differences between photovoltaic and thermal panels.

What is solar thermal energy?

Solar thermal energy is, like wind, photovoltaic or biomass energy, a renewable energy source and is generally used to heat water, it is therefore what could be called a solar heater.

A thermal solar panel has inside a tube that runs through it and through which water circulates with antifreeze or some heat-carrying fluid, upon receiving solar radiation, the liquid heats up and can use that energy (heat) for different purposes. Applications.

energy: Solar thermal energy is more efficient than photovoltaic solar energy and, in fact, they can have an efficiency of 70% while in photovoltaic we rarely find solar panels with more efficiency than 21-22%.
The technology is less complex than photovoltaics.
It is an optimal solution for heating water (solar hot water).
Disadvantages:
Solar thermal energy has fewer applications than photovoltaic. They are generally solar panels to heat water, either for “sanitary hot water (or DHW)” and solar heating.
Its maintenance is more complex than photovoltaics, among other things, due to its exposure to corrosion implicit in its operation.
Another consequence of its use for solar hot water is that, also due to corrosion, its life expectancy does not usually exceed 10 years.
Current situation:
Due to photovoltaic expansion, its low price and its multitude of applications (including heating water), thermal is losing application in favor of its photovoltaic sister.

What does the technical building code say?

The Technical Building Code, Royal Decree 314/2006, contains a document expressly dedicated to energy saving. In this document, its part 4 has been dedicated from the beginning to the implementation of solar thermal energy in buildings, called “DB-HE4 Minimum solar contribution of domestic hot water”, although in the latest edition it has adopted the name of ” Minimum contribution of renewable energy to cover the demand for domestic hot water”.

Previously, “a minimum contribution of solar thermal energy was required depending on the climatic zone and the demand for DHW”; but, now it is possible to justify it “using to a large extent energy from renewable sources or renewable cogeneration processes; either generated in the building itself or through connection to an urban heating system”. Therefore, it does not specify that it is necessarily with the use of a solar thermal collector and leaves the door open to other sources of renewable origin, such as photovoltaic, and that in fact is what is being done the most.