Renewable energies are all the energy sources that come from nature itself, which are inexhaustible or very abundant, which means that their generation and consumption do not imply a future shortage.

What are renewable energies and what are these?

In other words, renewable energy sources are the ones we can use without worrying about their depletion and also have less impact on the environment. There are many types of renewable energy depending on the element of nature from which they take that energy and depending on how this transformation takes place towards an electrical energy that we can consume.

Most of the installations are found located in large parks or centrals, not all of them can be installed at a private level since at that scale it is either not feasible by natural means or the costs could be very high. The ones we find most frequently in private homes are solar photovoltaic, solar thermal or biomass, although we will also find in some cases mini-wind or geothermal installations.

Difference between clean and renewable energies

The main sources of renewable energy

Photovoltaic solar energy is perhaps the one that has advanced the most in recent years at a technological level. It is also the one that is lowering its installation cost the most and everything indicates that it will become the main source of energy on the planet during the first half of this 21st century .
It is the energy that takes advantage of solar radiation to convert it into electricity . This radiation from the Sun is thousands of times higher than the amount of energy that the entire planet consumes today, we just have to take advantage of it in the right way to obtain clean energywhat to consume Currently we can see photovoltaic installations in all kinds of locations, applied to very different uses, from private homes, through shops, industrial buildings to large parks of hundreds of hectares.

Another advantage of solar energy is that it does not emit any type of pollution in its production , which is why, among other reasons, it is a good option to consider when making the switch to green energy. The problem or the biggest impediment is that it only produces energy during the day, with solar radiation, and not at night. How to store that energy efficiently and at a low cost is one of the biggest challenges for the coming years.

Solar thermal energy also takes advantage of solar radiation, but in this case the transformation of that energy changes. Instead of becoming electrical energy, thermal solar panels transform this radiation into heat energy . This type of installation, very common in homes, is usually used for the kitchen, for water and for heating.

Its use on large scales disappeared due to the high installation and maintenance costs for the energy it produces. At a particular level, it is a type of installation that has been very successful in Spain and continues to be installed due to its low cost , especially in areas where the installation of a renewable energy generation system is mandatory in new-build homes. In other words, it is installed because it is cheap, but the savings that it will give us on the water bill will not reach the levels of photovoltaic installations in electricity.

Although we find cases of domestic use with mini- generators that produce energy for the home , especially for isolated installations, without access to the network, the most normal thing is to see this type of installation in large wind farms, whether on land or even sea . This last type of park is gaining more and more importance because the use of land is not necessary and the movements of air masses are greater offshore, since there are no obstacles such as mountain ranges.

The biggest problem may be that although an annual production forecast can be made, it is difficult to predict the moments in which it is going to be produced or the amount that can be produced in a specific interval and even more complicated is that those moments of maximum production correspond to moments of consumption. 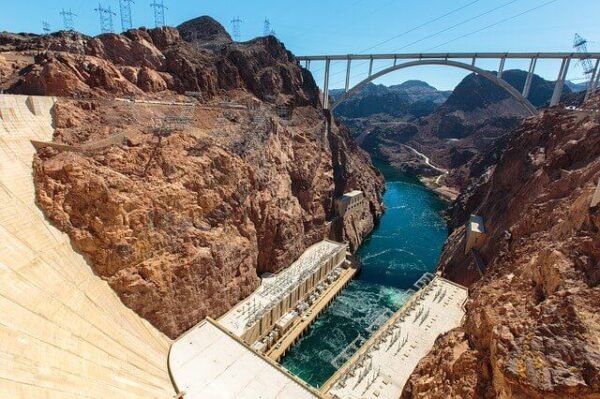 Hydraulic energy is what we obtain by taking advantage of currents or the movement of water , generally rivers, to later convert into electrical energy. It is very normal to see in towns throughout the Spanish geography paddle wheels in rivers that their movement is used for mills.
Currently where we can see more clearly the exploitation of hydraulic energy is in the dams. We will find this type of installation in areas with large slopes and rainy and due to the famous water cycle it is practically inexhaustible. For this reason it is considered a renewable energy source, despite the fact that it has many opponents since the construction of a dam usually involves the flooding of large areas of land, the change of the natural environment of the area and in some cases the disappearance entire villages under water.

Like hydraulic energy, tidal energy uses the energy produced by water, but in this case it will be due to the tides , the rise and fall of sea level. We have many other types of energy sources that take advantage of the sea but are not yet very developed, such as taking advantage of ocean currents, temperatures at different depths or even salinity.

The operation is not so different from that of hydraulic energy. The system works with gates that close when the tide has already risen and the water is released when the tide is low. The biggest problem in this case is the amount of energy that can be obtained in relation to the cost of producing it. This means that it is still not very profitable and prevents its expansion today.

This renewable energy source takes advantage of organic remains, the substances that make up living beings . It is important to note that it does not take advantage of living beings directly, but rather organic remains. The use of this energy is through the combustion of matter itself, that is, after all, it is a biofuel.
Biomass is having a special boom in Europe compared to the rest of the world, it is without a doubt where it is used the most and where it has been most developed and applied to different uses. At a domestic level we can see boilers that work with biomass, with briquettes obtained from wood waste. It is also common to see the application of biomass in the form of energy fuels, from sugar cane or beet.

This is the energy that is obtained from the internal heat of the earth that is transmitted through rock masses and generates geothermal systems. Everyone knows that the greater the depth in the earth’s crust, the higher the temperature that we will find. The water at these depths heats up and when it rises it causes different reactions on the surface. These reactions can be seen in the form of geysers or used for hot springs or to obtain energy.
It is a renewable energy since we obtain it directly from nature and it is inexhaustible, but some repercussions have been identified in this type of exploitation, such as microseisms, emissions of hydrogen sulfide or contamination of nearby waters.

With the development and research being done in recent decades to change the type of fuels we use and the type of energy we consume, renewable energy sources have exploded and the list goes beyond those mentioned above. There are many others that take advantage of practically the same elements as the previous ones, such as blue energy, the oceanic gradient, hydrogen or even aerothermal energy.

Objectives of renewable energies in Spain and Europe

Spain, together with the rest of the countries of the European Union, have set some objectives for 2030 , to generate a change in the energy industry, to increase the percentage of renewable energy that we consume and to stop the advance of climate change that is affecting each year a little more. If we do not meet the objectives in Spain, in Europe and throughout the world, stopping climate change could be very difficult. The situation is not easy, we are in the worst moment in terms of pollution and global warming, but we have to be optimistic, we are also in the best technical and technological moment to achieve it.

What are the most used renewable energies in Spain?

In Spain, the main renewable energies, according to the Government, are: wind, hydraulic and solar . With regard to self-sufficiency, solar energy is the most common, either photovoltaic or thermal.

What are the least polluting energies?

Despite being renewable, certain energies do pollute. The energies that affect the environment the least are solar, thermal or photovoltaic energy, and wind energy.