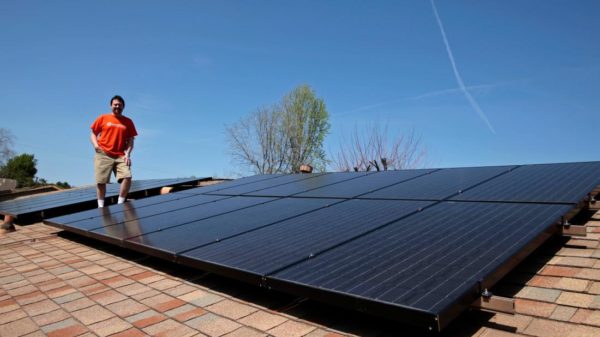 The best solar panels through our test.

To determine the best solar panels in the world, we tested approximately 45 solar panels side by side. We publish the results of the tests every month.

From this you can see that there are important differences in performance between the different solar panels. In some cases it is more than 20%.

Suppose you have a good roof available, more or less focused on the south and would like to have solar panels on it.

What are the best solar panels? Before you start your search for solar panels, there are two important questions you should answer first:

In fact, we can find 3 situations in which different solar panels work best.

1-An attached house for up to 8 solar panels.
In this situation, you will hardly ever succeed in generating your entire annual consumption with solar panels.

However, you want to make the most of your roof. The best solar panels are the panels with the highest capacity per square meter.

Then choose a solar panel with a large capacity, e.g. 300 Watt peak (WP) or higher. They are a little more expensive, but still can generate about 2,200 kWh per year.

Solar panels with such capacity tend to be attractively priced. However, if you have a consumption of 5,000 kWh, your roof is too small to cover all your consumption.

Then you will have to concentrate on solar panels with a large capacity, for example 300 WP or more.

3- A house with a very large roof.
In this situation, you have more roof than you need for solar panels.

Then you have a wide choice. For example, you can think about buying thin film solar panels like Solar Frontier .

Here are some tools to select the best solar panels.

What are the best Chinese solar panels?

Chinese solar brokerage panels are a big part of the market and fortunately Chinese products are no longer bad by definition.

The more factories there are and the more panels are manufactured in one factory, the better standardization, quality control and monitoring will begin.

Therefore, Chinese solar panels are often of excellent quality. In fact, many solar panels from “European manufacturers” only come from China, but they would prefer not to say so.

But it is good that there is a quality mark so that everyone knows what he or she buys, both the individual and the installer.

Everyone knows what quality panels they buy and they also offer. For example, they must meet different standards that must be guaranteed.

Are solar panels from China good?

After all, many European brands of solar panels have a Chinese producer.

What at first glance appears to be European solar panels may be behind the scenes of Chinese manufacturing.

To give an overview, we have listed what are considered the world’s leading brands.

Are Chinese solar panels worse than European ones?

It is a fairy tale that Chinese solar panels would be worse / qualitatively inferior compared to other solar panels.

Why should the quality of a solar panel be related to the country (or continent) of origin? Both in our country and elsewhere in Europe and China, there are suppliers / manufacturers who produce solar panels of better and lower quality.

Therefore, it may be smarter to look at individual producers of solar panels.

Production process
Quality is determined by:
1) the design
2. the materials used
3) manufacturing accuracy and verifications and guidelines determine whether everything is observed correctly
4) the specifications in the factory itself
5) the people who do the work.

As a consumer, you pay attention to the factory, the production process and the experiences of others with them. For example, look for “review”, “proof”, experience, “experience”, etc. with them.

Fortunately, there are also independent evaluators who show that Chinese solar panels are of good quality.

For example, the quality of Chinese solar panels is tested by Photon magazine with the best Chinese brands that are generally at the top of the list.

Sharp is an old Japanese company that you know from cassette tapes, etc.

Sharp has been making products for decades under the motto “Make products that others want to imitate”.

Since 1959, Sharp has been active as a manufacturer of industrial solar panel systems.

Sharp has always been a major innovator in the field of solar energy and is constantly looking for ways to achieve higher yields.

Sharp’s solar cells are known as very solid and very qualitative. Sharp solar panels are well available in Europe and have a large network of distributors.

Suntech is one of the largest producers of solar panels worldwide and we often find them, so they sell a lot and/or do a lot of marketing.

The company is based in China and listed on the New York Stock Exchange. Suntech has comprehensive quality control.

In addition, Suntech solar panels are priced on a Chinese basis.

Yingli Solar is a Chinese producer of solar panels and is one of the largest products in the world.

Yingli Solar is a vertically integrated producer of solar panels, which means that both are responsible for the production of the solar cells and the assembly/placement of the solar panels themselves.

Yingli Solar has experience in both photovoltaic systems for private use and large solar panels.

The company also supplies solar cells to other Western companies that understand ‘white labeling’, so it is possible that solar panels from other brands are made with solar cells from Yingli Solar.

Little by little, the focus was more on the creation of hybrid cars and sustainable systems in general.
It is only recently that BYD has begun to focus on the production of solar panels.

The company has just announced in 2010 that it will build a factory in Chinese Shaanxi that will be entirely dedicated to the production of solar panel batteries.

LDK Solar is one of the largest producers of solar panels in the world. It is a Chinese producer, which has not been active for a long time.

The company was only founded in 2005. LDK is a so-called vertically integrated producer. Therefore, LDK is responsible for producing solar cells and assembling solar panels.

LDK specializes in the production of polycrystalline and monocrystalline panels, which resells to solar panel producers and is therefore at the forefront of the chain.

Jinko Solar is also a solar panel manufacturer based in China. Jinko Solar panels are also readily available in Europe. Among others, Enfinity collaborates with this solar panel producer.

Later, in 2011, the company was also discredited as a result of an environmental scandal in China.