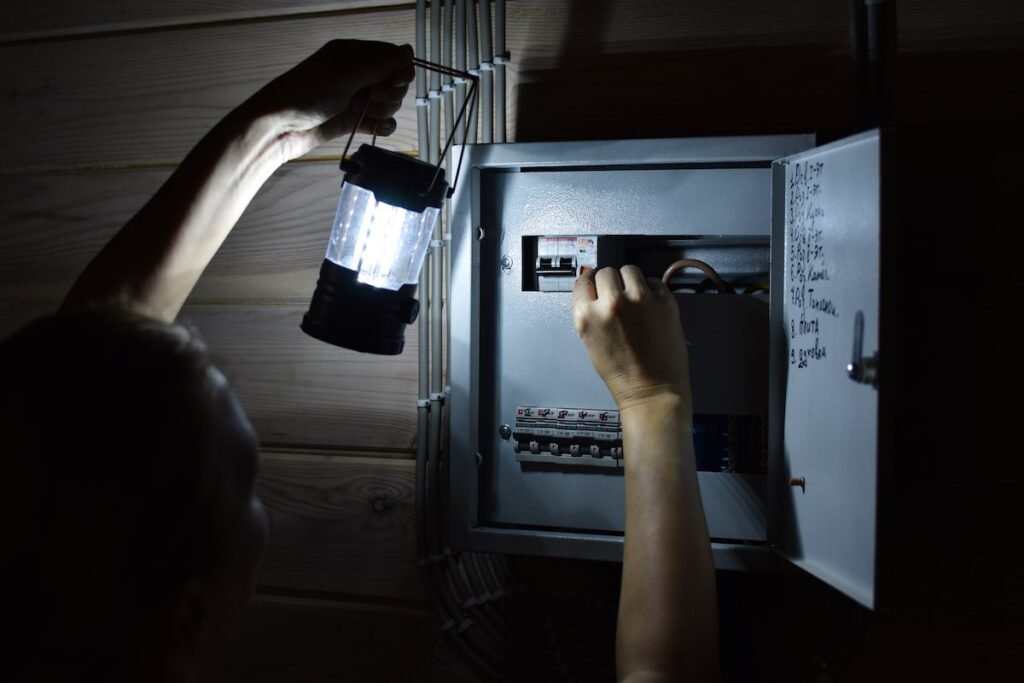 We start from the premise that we have  solar panels on the roof  and we are producing much of our electricity, electricity bills have been drastically reduced. Then, one windy night, a storm knocks down a huge tree in your neighborhood and the power goes out. When dawn breaks, will your fridge still work? Probably not.

When the power goes out, most home solar installations are designed to shut down to prevent them from feeding power back into the very wires that could be the source of the blackout. After all, they don’t want your solar panels to be the reason power company workers are injured by the stress of downed power lines.

But then what good are solar panels on a roof if they can’t produce electricity?

There has to be a way to keep the energy up, right? What about batteries, or preventing solar power from flowing into the grid when the grid is down? We talked about possible solutions solutions.

Why don’t solar panels work in a blackout?

Most solar-powered homeowners have what’s called a “grid-tie” solar system, which means the panels are connected to a  solar inverter .

The inverter is connected to the main AC panel of the house and to a special smart electricity meter that registers both the energy consumed by the electric company and the energy sent by the solar panels to the grid. Grid-tied solar systems work without any backup battery equipment.

That is why it is often said that “ the network is your battery ”. When your solar system produces excess power, you send it to your neighbors and profit from it (by virtue of net metering), but when the sun goes down, you still need power from the utility grid. If you do the math right, you can have an electricity bill close to 0.

In the event of a blackout , a typical grid-connected system has a special automatic shutdown system to prevent that extra power from being sent down possibly damaged power lines. This is a safety device designed to protect line workers who go out to repair them when they break.

But that also means that your house does not receive solar energy. In a blackout, the power from your solar panels goes nowhere, unless you have some way to store the electricity (like a battery) or separate the system from the grid.

How can you use solar power in a blackout?

If you want to keep your house running when the power goes out, there are a few ways to do it:

Solar lovers aren’t usually fans of burning things for power, but the cheapest way to ensure you have backup power in case of a blackout is to buy a generator.

With a generator you can get over 9,000 watts that can run most of your house while the power company workers reconnect the grid.

With your generator and some fuel, you’ll usually be able to ride out any extended grid outage, and even help out a neighbor if they need it. Your solar panels will stay off until the grid comes back on, but at least you’ll have power.

But in my opinion, generators are not a good option beyond their low price. I like the following proposals better.

For true peace of mind during a power outage, there is nothing better than a solar battery system.

There’s nothing like the feeling of being the only house in the neighborhood with the lights on after the power goes out.

There are plenty of options available, from a deep-cycle lead-acid battery bank to the sleek and easy-to-use  Tesla Powerwall .

Solar installers today are very experienced at installing batteries alongside solar installations, and you may be surprised at the number and variety of alternatives on the market.

Unlike solar power without batteries (i.e., a solar system connected to the grid), a solar power installation with batteries keeps its energy on “grid”, or disconnects from the grid when a blackout is detected. During the blackout, your small solar island will charge the batteries during the day and discharge them at night. As long as it has enough battery capacity, it could continue to work like this during a very long blackout.

If you’re not ready for the investment in whole-house batteries, there are also ” solar generators ” available that can at least keep your food cold and a space heater running.

Just keep in mind that  these portable options can be charged with or without solar panels while the grid is up, but then again, they won’t charge from solar power when the grid is down without the same kind of special equipment that used for a complete solar plus storage system.

A special inverter or inverter system.

Luckily, there is a way for a solar-powered homeowner to use the power their panels produce without a grid connection or  energy storage system .

SMA and Enphase, for example, are two companies that make special solar inverters that are designed to automatically disconnect from the grid in the event of a blackout, while continuing to supply power to your home from your solar panels.

While most solar inverters have that automatic shutdown we talked about earlier, SMA Sunny Boy inverters can be installed with a special circuit that allows homeowners to switch to pure solar power after a power outage.

Another company that has gone to great lengths to make solar work when the grid goes down is Enphase. The company’s Ensemble energy management system works together with its microinverters to power your appliances from your solar panels whenever the sun is bright enough, even without batteries.

Why don’t you disconnect from the commercial network?

People who want to ditch fossil fuels altogether and ensure they only consume clean energy at home may be tempted to go completely off the grid. And it is an option, but the initial investment is more expensive.

Although solar energy has never been as cheap as it is now, it is still a great investment. An off-grid solar system with battery storage will cost quite a bit more than an on-grid system.

Additionally, off-grid battery storage has to be able to provide the right amount of electricity you might need over the course of three cloudy or snowy days during the coldest part of winter wherever you live. In the sunnier months you’ll certainly have power to spare, but you don’t want to run out of power and have to resort to a fossil fuel generator during the winter.