The photovoltaic effect is produced by the generation of an electromotive force, through the absorption of light radiation, in a semiconductor material within a heterogeneous system.

As we can see in the exposed figure, the light bulb is the one that represents that load or consumption element, which will have an electrical resistance of 150W so that the power dissipated in the light bulb is the product of the intensity I of the current generated by the cell , multiplied by the potential difference V between the ends of the bulb: P= I x V . 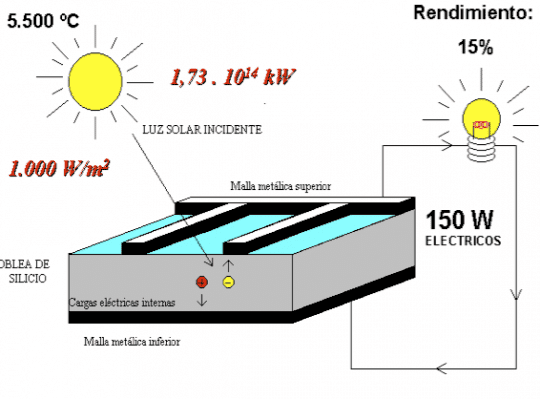 Diagram of how the photovoltaic effect occurs

Thus, a photovoltaic cell must be capable of generating an electric current in a closed circuit using solar radiation as its primary source of energy .

Explanation of the photovoltaic effect:

The explanation of how this current is generated, or the photovoltaic effect, would be, in a summarized way, the following:

Finally, it is important to mention that the PV cell is not an electric accumulator. Its ability to generate electrical energy is subject to solar radiation incident on it, that is, if there is no radiation, the cell will not generate electrical energy and depending on the intensity of the radiation, the electricity generated will be greater or less.
The photovoltaic cell is, without a doubt, the most important part of the photovoltaic solar panels .

The quality of it will determine the quality and performance of a panel and of the photovoltaic plant throughout its useful life. Always choosing quality brands , such as SunPower solar panels, Panasonic… among others, will be synonymous with success for a photovoltaic installation.