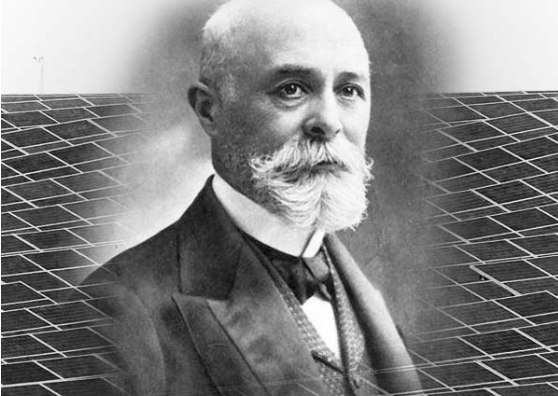 Next we will talk about Invention date of solar panels. Although solar panels seem like a new technology, in reality they already have many years of life. I will tell you the chronology from his birth to the present.

We associate photovoltaics with modernity and a vision of the future, while its history dates back to the first half of the 19th century, and its beginnings had little to do with current use. As with inventions, they are often the result of chance or coincidence. It was similar with photovoltaic energy. In   1839, the   French physicist   Alexandre Edmond Becquerel,   experimenting with metal electrodes and an electrolyte, discovered that electrical conductivity increases with backlighting and therefore that some materials produce a small amount of electrical current when exposed to light.

This discovery became a stimulus for further research and interest in the topic of solar energy. In   1876,   British physicist   William Grylls Adams  and his student   Richard Evans Day   discovered that an electrical impulse can be produced when materials made of selenium are exposed to light. His pioneering work was a harbinger of quantum mechanics long before most chemists and physicists accepted the existence of atoms. Although the selenium solar cells were unable to convert enough sunlight into electricity needed to power electrical appliances, they showed that the solid material can convert light into electricity without heat or movement.

In   1904, the   well-known   Albert Einstein   published his work describing the nature of light and the photovoltaic effect. He showed in it that light is a stream of particles, photons, each of which carries a strictly defined portion of energy, a quantum of energy. By acting on an electron located on the surface of a metal plate, a photon transfers all its energy to it. When the energy of the photon is greater than the binding energy of the electron, the electron is torn from the surface of the plate and the photovoltaic phenomenon occurs. For this discovery, Einstein   received the Nobel Prize. In   1916, the   American   Robert Millikan  He supported Einstein’s theory by presenting experimental evidence for the existence of the photovoltaic phenomenon.
In the history of the development of photovoltaics is also enrolled our compatriot   Jan Czochralski,   who in the   year  1918    discovered a method for the production of monocrystalline silicon.

The conquest of the Pole made the production of monocrystalline solar cells possible. The first silicon cell of this type was built in   1941  . A dozen years later, in   1954,  the first photovoltaic panel was built in the Bell Laboratories  research department    . Scientists   Gerald Pearson, Daryl Chapin and Calvin Fuller have   developed the first silicon solar cells capable of generating measurable electrical current. These cells were 6% efficient and used to power a toy windmill and radio.
The New York Times   described this discovery as  “the beginning of a new era, which ultimately leads to the realization of almost unlimited use of the sun’s energy for civilizational applications.” The cells’ high production costs and low efficiency led the achievement to be treated more as a technological curiosity than as something that could be commonly used.

In   1958,   the US Army and Air Force decided to use photovoltaic cells as a power source for a top-secret project: Earth-orbiting satellites. However, when the Navy was tasked with launching the first American satellite, it viewed solar cells as an unproven technology and decided to use chemical batteries as the power source for the Vanguard satellite    . Dr.  Hans Ziegler  was against  this theory   , who argued that conventional batteries would drain in a matter of days, while solar cells could power the satellite for years. It is thanks to him that, ultimately, as a compromise on the Vanguard I satellite,    a dual power system was used: chemical batteries and silicon solar cells. As Ziegler predicted, chemical batteries failed after a week or so, while silicon solar cells lasted for many years.

The   use of solar cells in space flourished   thanks to   NASA  in   the   1960s  . The view of electricity from the Sun on Earth seemed very far away, mainly due to the enormous cost. In space, however, price was not a significant factor. For the engineers, size, performance and durability were a concern.

The   70s   brought a  reduction of  more than   80% in the costs   related to the production of photovoltaic panels. Photovoltaic modules began to power lighthouses, railroad crossings, and buildings that were too expensive to connect to the grid. Continuous improvement in efficiency and lower prices allowed small solar cells to appear in a large portion of homes in the next decade, primarily for supplying calculators, radios, clocks, and flashlights.
A breakthrough   in the global solar market brought only   years   90  . It was then that the first autonomous and connected facilities were built and subsidies for this purpose were introduced in Germany and Japan. In   2000  the mass production of photovoltaic panels started.

Basically this is the chronology with the date of invention of the solar panels.

Puedes obtener mas informacion sobre How much energy does a solar panel produce.