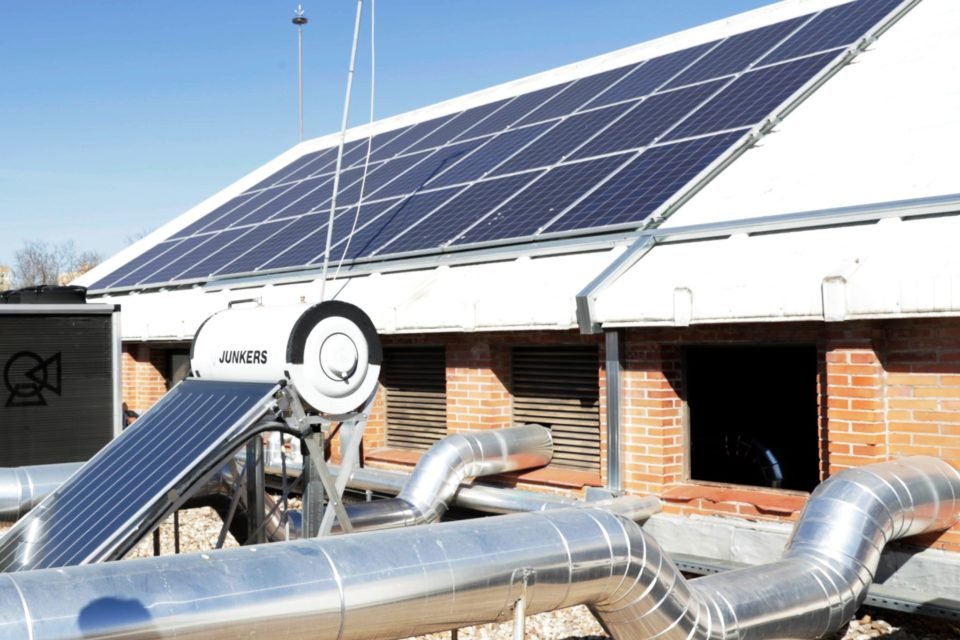 Photovoltaic panels can be used to generate electrical power in both domestic applications and commercial applications.

The photovoltaic panel is responsible for transforming the energy of solar radiation directly into electricity in the form of a direct current.

The solar cell is only capable of generating a voltage of a few tenths of a volt (+/- 0.5 V) and a maximum power of 1 or 2 Watts. Therefore, it is necessary to connect in series several cells (which behave as small current generators) to achieve voltages of 624 V, accepted in many applications.

The photovoltaic plate is designed to withstand outdoor conditions and be part of the “skin” of the building. Its useful life is considered 25 years.

The cells are encapsulated in a resin, and placed between two sheets to form the photovoltaic modules. The outer sheet is glass and the back sheet can be opaque plastic or glass, if you want to make a semitransparent module.

In the northern hemisphere, the plates should be oriented in a southerly direction with a certain inclination. The most appropriate in each location depends on the latitude and the time of year, being advisable the study of solar radiation received for each site.

On the other hand, the inclination of the modules will vary according to the energy needs planned and the period of use, in order to make a seasonal (winter, summer) or annual balance.

Production of electricity through photovoltaic panels

Photovoltaic panels produce electricity in the form of direct current and usually have between 20 and 40 solar cells. In any case, it is usual for the modules to be formed by 36 cells to reach the volts necessary for charging the batteries (12 V).

Photovoltaic solar panels can be linked together in two ways:

When a supporting structure of the solar modules is used, it is advisable to use materials that have good mechanical properties, as well as great durability, taking into account the long service life of the installations. Normally, the support elements are:

There is also the possibility of realizing the structures of photovoltaic modules with wood, duly treated; with minimal maintenance operations, presenting acceptable conditions for this use. Fixing parts, such as screws, should always be made of stainless steel.

In certain cases, in order to increase the performance of the catchment system, the support structure can be provided with movement with solar tracking systems.

They work by means of a motor normally associated with a computer that, according to the date and time of day, adjusts the orientation of the panels, either with respect to one or both axes of the plane that contains the panel. These systems are, of course, more complex and involve greater expense and higher maintenance.

The phenomenon of light diffraction makes it possible to obtain photovoltaic panels with a higher transparency index than the apparent one, since the shadow projected by each cell inside the building is lower than the surface it occupies. This implies that the solar panel is noticeably more opaque from the outside than from the inside. It is also possible to obtain greater transparency if, within the same plate, the distance between the cells is increased.

Solar panels its use in construction 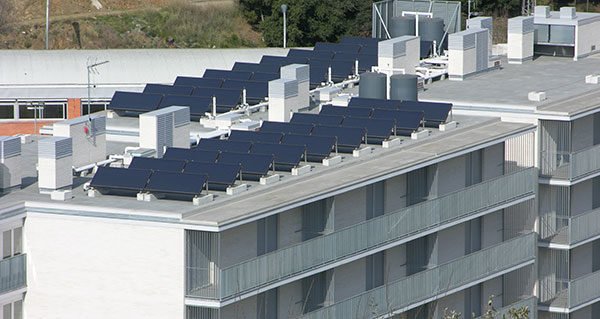 The photovoltaic plates used in systems connected to the network are not different from those used by autonomous systems. Those that are integrated into buildings are usually standard modules.

A common formal problem is the fact that they can come to form independent structures, superimposed on the building, added without responding to aesthetic criteria. In the best of cases, they are integrated into the facades or the roof.

For this reason, some companies have developed integrated photovoltaic elements in buildings that can replace some traditional elements of architecture.

The photovoltaic panels can therefore be treated as a constructive element and combined with other materials in large-area prefabricated modules (currently they are manufactured up to 14 m²).

They are appropriate for the formation of facades, the best orientation of which is the south, in spite of not being important the influence of a deviation of between 30º and 45º towards the east or the west in the annual calculation of energy capture.

What are photovoltaic inverters?