When talking about solar or wind energy installations, it is common to use the parameters of installed power, with the unit of measurement in Watts, but there are some concepts that frequently cause confusion and problems for users and amateurs when planning a photovoltaic installation.

One  Watt  represents the electrical power produced by a potential difference of one volt and one ampere, therefore the measurement is made at a certain instant or is referred to as nominally sustained power.

Energy generation or storage systems deliver power over time, and if we consider the Watts produced during an hour, we will be calculating the  Wh  or Watt/hour. If the power is not constant, it is done by averaging all measurements at intervals.

An energy installation is dimensioned taking as reference the maximum values ​​that its components produce in optimal conditions. The power delivered by solar panels is described as  Wp  or Watt peak, although it does not mean that it will not exceed that power (we will see why below). In panel specifications, this value is described as Pmax or Maximum Power.

Specifications of a solar panel

In the case of inverters, they are usually referred to by their nominal operating power, but there is a peak power that can be 2 or 3 times the nominal, and they support it for a short period of time. The Watt peak in an inverter determines the maximum consumption that the devices can make for an instant.

In the case of solar panels, they are marketed and promoted taking as a reference the value of peak power (Wp) and, as the name already indicates, it is the maximum power that it will deliver under specific conditions. And here comes the first problem.

Manufacturers of photovoltaic panels carry out standardized quality controls, under standard market conditions, allowing specifications to be compared in similar situations of use. However, these conditions under which they are tested turn out to be mostly different from those that the panel will face in its useful life, where it will be placed outdoors, with very variable thermal amplitudes throughout the year, even more so if it is located at close latitudes. to the poles.

The conditions established as standard for the tests of photovoltaic modules consist of an irradiance of 1000 W/m2 (Watts per square meter), and 25ºC of panel temperature. At first glance, we may think that if the average temperature of our location is temperate, it will not affect the panel, but we must consider that it will be exposed to direct radiation from the sun throughout the day, and we will probably find that the exposed face will be above 40ºC most of the day.

The power produced by a solar panel varies considerably as its temperature increases, it is estimated at a loss of approximately 1% for every 2ºC above the standard temperature. Therefore, only with the increase in temperature we will be losing 10% to 15% of the power that it promises in its specifications. Some manufacturers have special models for specific uses that withstand higher or lower temperatures, such as those used in space by satellites, or in polar bases where they must withstand extremely low temperatures.

The following graph corresponds to the coefficient of variation in the maximum power (Pmax), short circuit current (Isc) and open circuit voltage (Voc) in a 260W panel. 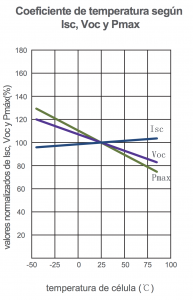 Just as heat has a negative impact, producing power loss, we must appreciate that at lower temperatures we obtain greater power, sometimes even more than that declared in the specifications. In other words, a nominal 260W panel could deliver up to 30% more (340W) if very low temperature conditions and strong solar irradiance are met.

When working in temperatures below the standard of 25ºC, the solar panels deliver greater power than that declared in the specifications.

This variation makes photovoltaic generation more efficient at latitudes close to the poles, even though they receive fewer hours of sunlight on average.

The  International Renewable Energy Agency  (IRENA) provides access to a  world atlas of irradiance , which we must take into account if we want to consider these values.

Going back to the specifications of the panels, the standard tests are carried out considering 1000W/m2 (Watts per square meter), but in a real installation they will probably be reached for short periods of time, and mostly the irradiance received will be around 700 to 800 W/ m2. This difference is given by factors such as the inclination of the panel towards the sun, cloudiness, and air density.

A small installation will probably have the panels anchored in a fixed position, so they are not pointed directly at the sun, and will only be coincident for some short time. In large installations, trackers are used to orient the panels to improve irradiance on the capture surface.

It is for all this that when choosing the photovoltaic panels to be used in an installation, we must observe the context of the installation in its entirety, consult the irradiance, measure the temperature throughout the year, and point out the space where they will be located. Oversizing the system is a recommendation, although we must do it carefully.

In conclusion, the power of the panel we purchased… is just a reference.